Madrid to New York: the year of Western protest 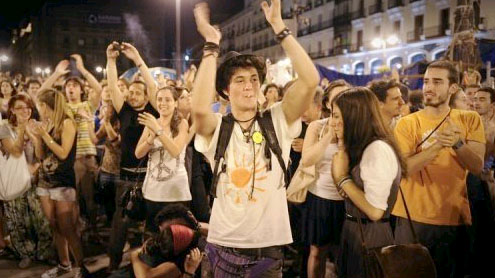 From Spain’s “indignados” protesters to Occupy Wall Street, 2011 was the year when people power, fueled by frustration at a deepening financial crisis, confronted the Western world’s elites.

Initially it was the drama in North Africa that gripped the world, starting with Tunisians ousting president-for-life Zine El Abidine Ben Ali, then sweeping unstoppably — and increasingly bloodily — through Egypt, Libya, Syria and Yemen.But unrest, albeit non-violent, was also erupting on the other side of the Mediterranean as Europeans lost patience with soaring unemployment, financial chaos and governments’ inability to find a solution. The epidemic also swept across the Atlantic and was caught by the Americans.

By the end of the year, Time magazine would ditch its singular “person of the year” for the collective protester, declaring “a contagion of protest.”Greeks had already begun large-scale demonstrations in 2010 against austerity measures meant to save their collapsing economy.Then on May 15 this year, Spaniards sparked a new phase by launching the “indignados” or outraged movement against youth unemployment and budget cuts, but also in protest against political corruption — a theme that struck a chord with voters across the West.

Tent camps sprang up and the Puerta del Sol area in Madrid saw huge demonstrations, peaking in June with a gathering of 200,000 people.As in subsequent protests around the world, the leaders were university-educated youths inspired by the Arab uprisings and making heavy use of social networking tools like Twitter and Facebook.Similar protests began in Greece on May 25, where demonstrators camped in the center of Athens to highlight crippling national debt and a crisis of confidence in elected officials.

When a hitherto unknown movement called Occupy Wall Street (OWS) set up camp in New York in September — again, fronted by young, media-savvy activists — it pronounced itself the latest link in a single chain.”Arab Spring, European Summer, American Fall,” the OWS slogan proclaimed.Unlike the desperate struggles against dictators in the Arab world, protests in Europe and the United States were largely non-violent.

But there was plenty of desperation at the apparently growing divide between ordinary people and their political and financial rulers.Britain experienced dramatic unrest of a different sort in August — rioting and looting by youths communicating via Twitter in London and other cities.There is little consensus on whether the mobs were criminal or, in their own way, were expressing discontent at the elite’s control. What that heated debate has exposed, however, is that anger at powerful financiers and their political allies is widespread.

September saw 400,000 people march through Tel Aviv and other Israeli cities, while OWS in New York inspired copycat camps across the United States, as well as in Canada, London and as far away as Sydney.Although relatively small, the US protests ended up attracting the most attention, coming at a time when the media and politicians were gearing up for the 2012 presidential campaign.The OWS movement was widely criticized for an absence of clear demands and it lost some steam after a string of mayors, including in New York, evicted the tent camps.

However, the movement’s overall claim to represent “the 99 percent” against the super-rich “one percent” won broad support in polls and has already changed the national debate.Campaigning in Kansas a few weeks ago, President Barack Obama spoke very much like an OWS protester himself.”For most Americans, the basic bargain that made this country great has eroded,” Obama said. “Those at the very top grew wealthier from their incomes and investments than ever before.”

According to a new report by the Organization for Economic Cooperation and Development, the gap between the rich and poor is the biggest for 30 years worldwide, led by countries as diverse as Mexico and Britain.With significant protests against the status quo bubbling up in Russia and China just as the year closed out, it seems that the refrain about the 99 percent versus the one percent won’t be going away any time soon.