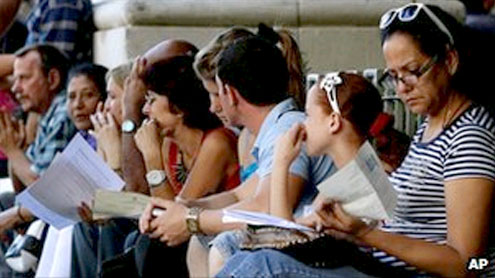 Large numbers of people in Latin America have rushed to apply for Spanish citizenship on the final day descendants of civil war-era exiles were eligible to apply.

The scheme was open to people whose parents or grandparents fled Spain under Franco and during the 1936-39 civil war.Since 2008 more than 200,000 people have been recognised as Spanish.Most applicants were in Latin America, particularly Cuba and Argentina.The Historic Memory Law was passed by Spain’s former socialist government in 2007.A provision added in 2008 – known as the Law of Grandchildren – offered citizenship to anyone whose parents or grandparents were born in Spain but left the country between 1936 and 1955.

A three-year period during which applications could be made expired on Tuesday.A large queue formed outside the Spanish consulate in the Cuban capital, Havana, as people rushed to beat the deadline. I am very satisfied to have done this on the last possible day,” Cuban pensioner Jorge Vallos told the Associated Press after submitting his application.”Everyone is trying to take advantage of this in order to travel and to be able to visit our families,” teacher Daisy Ramos said.Spanish embassy officials say that up to 180,000 Cubans could be eligible for Spanish citizenship – more than 1% of Cuba’s population.

Long queues also formed outside the Spanish consulate in the Argentine capital, Buenos Aires.More than 60,000 Argentines have already been given Spanish citizenship, out of about 300,000 who are thought to be eligible – the largest number in any one country.But most are not expected to go to live in Spain, which is suffering an economic crisis and high unemployment. For now I am staying here,” Argentine Daniel Garcia told Reuters after making his application. “I am doing it to be able to travel and to have the passport.”Latin America accounts for more than 90% of those seeking citizenship, with large numbers applying in Mexico and Venezuela.

Outside the region, the most applications have been in France, where many Spanish Republicans took refuge after their defeat in the civil war.The Spanish foreign ministry says that – as of 31 August – citizenship had been granted to 213,787 people out of 378,862 applications.The total by the end of the process is expected to reach 300,000. Those granted Spanish passports do not have to give up their current citizenship.About half-a-million people were killed during the 1936-39 Spanish Civil War, in which a nationalist military revolt led by General Francisco Franco overthrew a left-wing Republican government.

An estimated 500,000 people died in the war, and political killings and persecution continued during Gen Franco’s long dictatorship, which only ended with his death in 1975.The Historic Memory Law passed under the previous socialist government was aimed at addressing the legacy of the conflict.It offered compensation to the victims and help in finding the bodies of the dead, many of whom were buried in secret mass graves.But the measure proved controversial in a country still divided by the Civil War. It was opposed by the conservative Popular Party, which won power in this November’s general election. – BBC