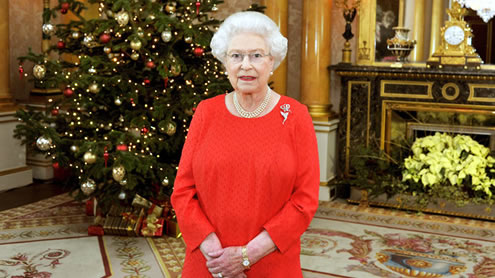 The Queen has used her annual Christmas Day broadcast to speak of courage and hope in adversity. The message was recorded before her husband, the Duke of Edinburgh, was treated in hospital for a blocked coronary artery.

Prince Philip is still in hospital, and has missed a church service attended by the rest of the Royal Family. The Queen also spoke of “the importance of family”, and called the Commonwealth a family “in the truest sense”. In her message, recorded on 9 December, the Queen said the Royal Family had been inspired by the courage shown in Britain, the Commonwealth and around the world.

She noted the resilience of communities in New Zealand after earthquakes, Australia after flooding and Wales after the mining disaster at  Gleision Colliery. “We’ve seen that it’s in hardship that we often find strength from our families; it’s in adversity that new friendships are sometimes formed; and it’s in a crisis that communities break down barriers and bind together to help one another,” she said. “Families, friends and communities often find a source of courage rising up from within. “Indeed, sadly, it seems that it is tragedy that often draws out the most and the best from the human spirit.” The Queen, who is a great-grandmother, also talked about the Commonwealth’s “family”, with its “shared beliefs” and “mutual values”. She also reflected on her own family, in a year in which her grandson Prince William got married and Prince Philip turned 90.

The prince had a coronary stent fitted after suffering chest pains on Friday. He spent Christmas Eve – and so far Christmas Day – at Papworth Hospital in Cambridgeshire. Earlier, prayers were said for the prince during the Royal Family’s traditional Christmas Day service at St Mary Magdalene Church on the family’s Sandringham estate. Afterwards, the royals – including, for the first time, the Duchess of Cambridge – greeted well-wishers. The Queen attended the service, along with the Prince of Wales and Duchess of Cornwall, Prince Harry, and the Queen’s granddaughter Zara Phillips with her husband Mike Tindall, whom she married earlier this year. Family members are going to visit the duke, who is said to be eager to leave hospital, later. In the Queen’s message, footage of the wedding of her granddaughter Zara Phillips to Mike Tindall and Prince William’s marriage to Kate Middleton was played as she spoke of her own family. “The importance of family has, of course, come home to Prince Philip and me personally this year with the marriages of two of our grandchildren, each in their own way a celebration of the God-given love that binds a family together,” she said. She spoke of the importance of forgiveness and said the world was “going through difficult times”. “Finding hope in adversity is one of the themes of Christmas,” she said. “Jesus was born into a world full of fear. The angels came to frightened shepherds with hope in their voices: ‘Fear not’, they urged, ‘we bring you tidings of great joy, which shall be to all people’.”  The monarch also said: “Although we are capable of great acts of kindness, history teaches us that we sometimes need saving from ourselves – from our recklessness or our greed.”

The Christmas address is written by the Queen herself – one of the rare occasions where she does not turn to the government for advice. The broadcast, in which the Queen wore glasses and a strawberry red dress by Angela Kelly, was filmed in Buckingham Palace’s 1844 room. Pupils from St Joseph’s Catholic Infants’ School in Camberwell, south London, are seen performing a scene from a nativity play. It concludes on the palace forecourt with the Band of the Irish Guards playing the carol O Little Town of Bethlehem.- BBC

Upgradation of PITHM as university:Sindh govt reverses its earlier decision