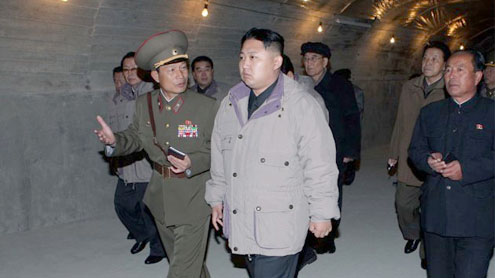 BEIJING: North Korea will shift to collective rule from a strongman dictatorship after last week’s death of Kim Jong-il, although his untested young son will be at the head of the ruling coterie, a source with close ties to Pyongyang and Beijing said.

The source added that the military, which is trying to develop a nuclear arsenal, has pledged allegiance to the untested Kim Jong-un, who takes over the family dynasty that has ruled North Korea since it was founded after World War Two.The source declined to be identified but has correctly predicted events in the past, telling Reuters about the North’s first nuclear test in 2006 before it took place.The comments are the first signal that North Korea is following a course that many analysts have anticipated — it will be governed by a group of people for the first time since it was founded in 1948.

Jang Song-thaek, 65, brother-in-law of Kim Jong-il and the younger Kim’s uncle, is seen as the power behind the throne along with his wife Kim Kyong-hui, Kim Jong-il’s sister. So too is Ri Yong-ho, the rising star of the North’s military and currently its most senior general.The younger Kim, who is in his late 20s, has his own supporters but is not strong enough to consolidate power, analysts said.

“I know that he’s been able to build a group of supporters around himself who are of his generation,” said Koh Yu-hwan, president of the Korean Association of North Korean Studies in Seoul.”So it is not entirely elders in their 70s, plus some like Jang in their 60s, who are backing him. These young backers will be emerging fairly soon.”Koh said the coterie was put in place by Kim Jong-il before he died. “The relative calm seen these few days shows it’s been effective. If things were not running smoothly, then we’d have seen a longer period of ‘rule by mummy’, with Kim Jong-il being faked as still being alive.”

He said the younger Kim would accept the set-up, for now. “Considering the tradition of strongarm rule by his father and grandfather, things can’t be easy for him,” he said.Ralph Cossa, an authority on North Korea and president of the U.S. think tank Pacific Forum CSIS, said it made sense that the ruling group would stick together.”All have a vested interest in regime survival,” he said. “Their own personal safety and survival is inextricably tied to regime survival and Kim Jong-un is the manifestation of this. I think the regime will remain stable, at least in the near-term.”He added in a commentary that the new group may be inclined to reform, but stressed this was far from confirmed.

“Over the long term, there appears to be some hope, primarily emanating from Beijing, that Kim Jong-un will take North Korea down the path of Chinese-style reform, apparently based on the belief that Jang is or will be a ‘reformer’.””Who knows, this may be true. While this could relieve the suffering of the North Korean people over time, it will do little to promote the cause of denuclearization, however.”The high-level source also said North Korea test-fired a missile on Monday to warn the United States not to make any moves against it. Pyongyang however had no immediate plans for further tests, barring an escalation of tensions.

“With the missile test, (North) Korea wanted to deliver the message that they have the ability to protect themselves,” the source said.”But (North) Korea is unlikely to conduct a nuclear test in the near future unless provoked” by the United States and South Korea, the source said.The unpredictable North’s nuclear program has been a nagging source of tension for the international community.Pyongyang carried out nuclear tests in 2006 and 2009, and has quit six-party talks with South Korea, the United States, China, Japan and Russia on abandoning its nuclear program and returning to the Non-Proliferation Treaty.

The high-level source also said Beijing was only notified of Kim’s death earlier on Monday, the same day North Korean state television broadcast the news. Kim died on Saturday.A leading South Korean newspaper reported on Wednesday China learned of Kim’s death soon after it occurred.China has given no official comment or even hints suggesting it was told of Kim’s death before the public announcement.Beijing, the North’s closest ally and biggest provider of aid, has pulled out the stops to support the younger Kim.

The government has invited him to visit and, in an unusual gesture, President Hu Jintao and Vice-President Xi Jinping also visited the hermit state’s embassy in Beijing to express their condolences. Roads leading to the embassy were blocked.Mainly, the prospect of instability on its northeastern border worries China and it sees the younger Kim and his coterie as the best prospect for keeping North Korea on an even keel.

North Korea has been pressed by China to denuclearize and is willing to do so on condition that North and South Korea, the United States and China sign an armistice replacing a 1953 ceasefire agreement, the source said.The two Koreas have been divided for decades and remain technically at war since their 1950-53 conflict ended with an armistice but no peace agreement. The United States backed the South, while China supported the North in that conflict.Pyongyang is also convinced there are U.S. nuclear weapons in South Korea and demands Washington pull them out, the source said. – Yahoonews