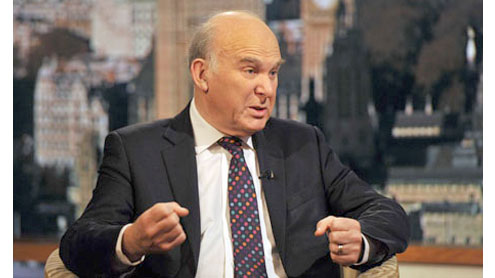 Vince Cable has served notice on the “whingeing” City that the coalition government will ignore the special pleading of bankers to make the economy less dependent on a sector that has caused “immense damage” to Britain.

Writing in the Guardian, the business secretary says the caricature of the City as a “source of systemic instability, unfettered greed and industrial scale tax dodging” is true, but he blames a small number of “rogue institutions” and a “sub-caste of financiers” for the blow to the Square Mile’s reputation.David Cameron cited the need to defend the interests of the City when earlier this month he rejected a new European treaty to tackle the sovereign debt crisis in the eurozone, but Cable says many of the new regulations proposed by Brussels are necessary. Hinting at Liberal Democrat irritation with the prime minister’s negotiating tactics, the business secretary says “in a calm, unpoliticised environment” disagreements could have been resolved through qualified majority voting.

He calls financial regulation a “sideshow” compared with the need to avoid a catastrophic outcome to the eurozone crisis and a European slump.”And in the UK we need to put the whingeing of the City to one side and concentrate on delivering our core narrative, to achieve growth by rebalancing the UK economy: sectorally towards advanced manufacturing, creative industries, higher education and professional services – and therefore with less reliance on banking; from London to provincial Britain. The bankers don’t speak for Britain and the coalition will not put their interests above the rest of the country.”

The ratings agency Moody’s said on Tuesday night that the UK faced “formidable and rising challenges”, noting that the country’s prized triple-A rating depended on keeping the deficit reduction plan on track, adding: “Any additional weakening in the macroeconomic outlook or a need to support the banking system could temporarily set back the government’s fiscal consolidation … the outlook on the rating is likely to be sensitive to future developments in the euro area’s debt crisis.”

Cable says there are two views of the City. “One is that it is a vital national interest: a unique network of innovative firms and workaholic employees who generate shedloads of tax revenue for UK PLC. The other is that it is a source of systemic instability, unfettered greed and industrial-scale tax dodging.” The uncomfortable truth, he adds, “is that both of these caricatures are true”.He continues: “A great deal of the apparently high-minded European drive to tax and regulate Britain’s enclave of Anglo-Saxon capitalism is prompted by a protectionist desire to have a bigger slice of it. And much of the patriotic flag waving by the City disguises special pleading on behalf of banks, in particular, whose practices have caused immense damage to Britain’s productive economy.”

Defending the decision of the coalition to support the proposals from the commission chaired by Sir John Vickers to ringfence the retail operations of banks from their investment arms, Cable says “no sensible government (and few bankers) believe that the freewheeling days of the past can continue”.Cable strongly opposes a financial transaction tax, which is backed by France and Germany, but says much “phoney emotion” has been generated by the proposal. “On the EU side, a technically challenging proposal has been wrapped in almost spiritual clothing (indeed, the Vatican has endorsed it).

“But it is in reality a cynical raid on UK financial services – or, more likely, the consumers of them – to fund the EU budget: a perverse Robin Hood Tax levied on the people of Nottingham to pay King John. This tax has, however, never been a serious threat to the City since taxes are governed by unanimity.”