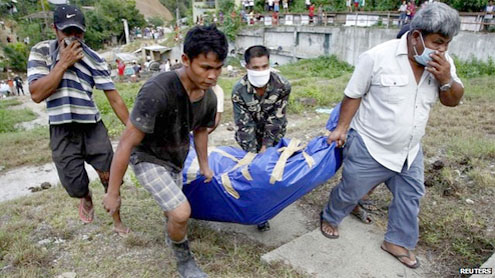 The authorities in the southern Philippines are struggling to deal with the aftermath of devastating flooding brought by Typhoon Washi.

More than 1,000 people are dead or missing after the weekend’s disaster – many people were washed out to sea.Mass burials have been carried out in some areas, while there is anger than some bodies have been stored at dumps.There are concerns that disease could begin spreading in the shelters where thousands of survivors are now living.President Benigno Aquino, who visited the affected area on Mindanao island on Tuesday, said officials have an obligation to find out why so many people died and why no proper disaster plans were in place.

“If we want this tragedy to be the last of its kind, we need to learn from our mistakes,” he said at a meeting in the badly hit coastal town of Cagayan de Oro.He has declared a national calamity to free up funds for the recovery, but asked survivors to help by not moving back to live in “places that put your lives at constant risk”.The official death toll now stands at 957, with another 49 people missing.The BBC’s Kate McGeown, in Cagayan de Oro, says funeral parlours there are full and refusing to take in more bodies.

Mayor Vicente Emano said the bodies had to be removed from residential areas so had been taken to a landfill site until appropriate graves could be prepared.But one villager searching for a lost relative said he was “horrified”: “They treated the bodies like animals and left them there under the sun and without any covering.”In Iligan, another devastated town, the authorities have begun burying unclaimed bodies.”It is not really a burial per se, but we are just depositing the bodies in a place where it is safe from the people so as not to threaten public health,” the city’s mayor, Lawrence Cruz, told Reuters news agency.

He told AFP that fingerprints and DNA samples were being taken from the corpses and stressed that they were being placed in individual graves.”It is not like digging a hole and sticking them in there,” he said.The Philippines is struck by several typhoons and tropical storms every year, but the south of the country usually escapes the worst damage.Many of those who died were sleeping as Typhoon Washi caused rivers to burst their banks, leading to landslides.

Our correspondent says although there are detailed disaster-preparedness plans in other parts of the Philippines, there is a sense that this was lacking in the region where the storms hit.Logging blameOfficials say the final death toll is likely to pass 1,000, with bodies still being recovered at sea. Some 338,000 were affected and more than 10,000 homes damaged.About 40,000 people on Mindanao, many of whom were already desperately poor, are now living in evacuation centres after losing their homes and possessions.

John Salva, a spokesman for British aid charity World Vision, said the centres had become severely overcrowded, with signs of disease beginning to appear.”It’s really a struggle to manage those evacuation centres, there’s a shortage of water and a shortage of food,” he said.Questions are also being asked about whether illegal logging on the coastal hillsides worsened the scale of the disaster.The UN Special Representative on Disaster Risk Reduction, Margareta Wahlstrom, said the disaster showed that more must be done “to ensure early warning systems are effective in an age when climate change is intensifying the impact of typhoons”. – BBC