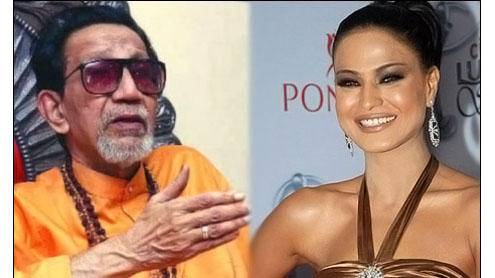 MIMBAI: Shiv Sena supremo Bal Thackeray today lashed out at Pakistani actor Veena Malik and all other artistes, saying all of them should be packed off to their country.

In an editorial in his party’s organ Saamna, Bal Thackeray writes: “Veena Malik is a blot on our country’s culture. Who is Veena Malik? Why is so much ruckus being raised about her?”She goes missing for some days and it appears to be a publicity stunt.….sometimes she does obscene acts in Bigg Boss and sometimes she gets herself photographed in the nude for magazines.”Veena is not such a big actress from Pakistan that we should go on praising her.

“I think she has a temporary visa and she is staying here since months. It seems she has obtained Indian citizenship. This amounts to stabbing oneself in the back.”There is a trend in Bollywood to hire Pakistani artistes. Pakistani actors come to India and do not want to leave. People from Pakistan come to India to watch cricket matches and suddenly vanish. It’s difficult to say whether they work for terror outfits or not.”We are so careless that we are welcoming our enemies too.

“Adnan Sami also seems uninterested in going back to his home country. Pakistani comic artistes come here in the name of improving ties and go back earning money.”On the other side, Pakistani government doesn’t even give visas to our artistes. There is a virtual ban on entry of Amitabh Bachchan, Lata Mangeshkar, Asha Bhonsle in Pakistan.”There is also a ban on our film songs there, but we bring in useless Pakistani artistes here and feed them.

“Dolly Bindra says, Veena Malik has ISI connections. If that is so, the person who gave her visa should be jailed.”Such persons should be in the same cells with Afzal Guru and Kasab.”We should clean up our country and send Veena to hell”, signs off the Shiv Sena supremo. – Geonews

‘Plan to arrest me being hatched in Punjab’