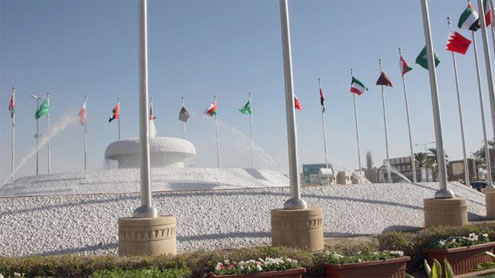 RIYADH: Hectic preparations are under way in the capital for the 32nd GCC’s Summit that will take place on Dec. 19 and 20.

Custodian of the Two Holy Mosques King Abdullah received GCC Secretary-General Abdullatif Al-Zayyani at his palace in Riyadh last Monday for a key meeting ahead of the summit.Posters and flags of the GCC member states are already decorating the city’s main roads and the conference venue as senior secretariat officials met to finalize conference schedules. Analysts say economic and security issues are likely to be on top of the agenda with a special focus on creating more jobs for Gulf citizens.

Ways to strengthen the GCC’s unified defense force are also expected to be discussed by GCC leaders. Such a defense strategy had proved effective recently in Bahrain, according to analysts.Recent developments in Syria and Iran issues will also figure on the agenda, they said.Media reports suggest that this summit may also study, for the first time, an Egyptian application to join the GCC.This request follows similar initiatives launched by Jordan and Morocco early this year.There are also other topics such as the GCC’s efforts to use nuclear energy for peaceful purposes, analysts pointed out.

These issues were discussed at a meeting of the relevant secretariat team last Sunday, said officials.In remarks made recently, Ambassador Hamoud Al-Roudhan, a senior official in charge of GCC affairs at Kuwait’s Ministry of Foreign Affairs, said Kuwait’s proposals to the summit would include further strengthening of ties among the member states.He pointed out that the GCC’s new strategy envisages signing more agreements with members of the international community within the framework of the GCC’s aims and objectives.

The Kuwaiti official also expressed concern over Iran’s interference in the Gulf region, adding that the Iranian media had been playing a negative role vis-à-vis the GCC.Saudi foreign relations expert Abdullah Alshamri, meanwhile, told Arab News that the situation in Iraq in the wake of the US military pullout and the Syrian crisis would also receive the attention of the GCC leaders.They will be debating the issues with greater confidence this time as a result of recent successes achieved in resolving Yemen’s  leadership tussle peacefully.He said the GCC had overtaken the Arab League as a major player in dealing with regional challenges.

Highlighting the group’s strategic moves against Syria, Alshamri said the GCC’s role and its influence are increasingly becoming prominent in the region.According to him, the Iranian issue will be on the table against the backdrop of the recent visit of a top Iranian security and intelligence official, Haydar Moslehi, to Saudi Arabia on Monday.The new development, Alshamri said, presents an opportunity to for Gulf leaders to step up their efforts to resolve the Syrian crisis.

The Saudi expert also suggested that the GCC should benefit further from its strategic relations with Turkey.  He said Turkey’s role had gained more attention following Foreign Minister Prince Saud Al-Faisal’s recent remarks that Saudi Arabia and the other Gulf states welcome Turkey’s efforts in resolving the Arab crises.

John Duke Anthony, president of the National Council on US-Arab Relations, who is in Riyadh to attend the summit, highlighted the importance of security in promoting economic stability. “Any economic progress needs to be supported by global and domestic security affairs,” he said.Anthony praised the efforts made by Saudi Arabia and the UAE to protect Bahrain’s stability. – Arabnews