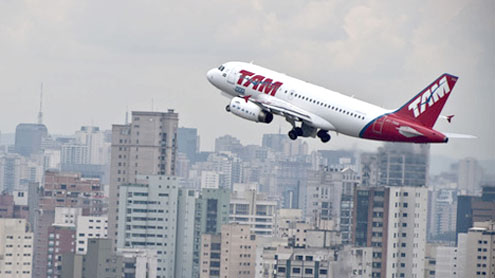 The merger of two major Latin American airlines has been approved, creating the largest carrier in the region.

Brazil’s anti-trust authorities said they approved the merger of the Brazilian airline TAM with Chile’s LAN, first proposed in 2010.The new airline, LATAM, is valued at about $14.5bn (£9.4bn) and will represent 6% of global air transport.Last year, TAM and LAN flew more than 45 million passengers and 754,777 tonnes of cargo.The combined airline would fly to 115 destinations in 23 countries, with a 40,000-strong workforce.Chile’s anti-trust authorities had already approved the merger but had set 11 conditions, including fewer flights to the Peruvian capital, Lima.

Brazil’s body also set some conditions, including a reduction in the number of flights between Sao Paulo and Santiago and that the two airlines join a single international body.TAM is a member of the Star Alliance group of airlines, which includes BMI, Lufthansa, SAS and Air China.Meanwhile LAN is a member of the Oneworld airline alliance, which includes Iberia, British Airways, Qantas and JAL.The airlines have not yet said which one they will join. – BBC