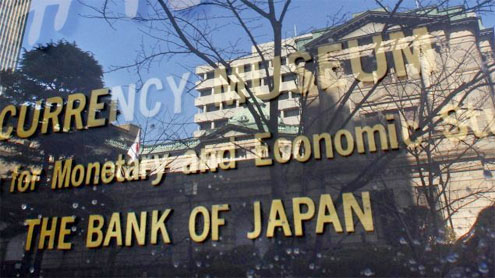 Japanese manufacturers’ sentiment has turned pessimistic due to a strong yen and Europe’s debt crisis, the latest Tankan survey has found.

In its quarterly survey, the Bank of Japan said large manufacturers’ sentiment in the three months to December dropped to minus four from plus two three months ago.The survey is one of the factors considered by the bank’s rate-setters.Analysts said sentiment could worsen if Europe’s debt crisis continues.”Companies are taking more cautious views of the economy due to the one-two punch of the slowdown in overseas economies and the firmer yen,” said Yoshikiyo Shimamine from Dai-Ichi Life Research Institute in Tokyo.

“Given the likelihood that overseas economies including those of emerging nations will slow further, we should be aware of the risk of big manufacturers’ sentiment towards the business outlook worsening more.”A reading of 100 would be the best mood possible, with minus 100 as the worst.Japan’s economy has rebounded from a recession triggered by the 11 March earthquake and tsunami, but as the initial boost from companies restoring supply chains and production facilities subsides, exports and factory output could slow again.

Adding to the problems was the effects of the floods in Thailand, which further disrupted supply chains. Sentiment was also hit by the decreasing demand from Europe as growth slowed.”I think the BOJ will be slightly shocked by this Tankan,” said Hirokai Muto from Sumitomo Mitsui Asset Management.”This Tankan report also shows signs of weak overseas demand.

“Another effect of the uncertainty in Europe and the US has been that global investors have turned to the Japanese currency as a safe haven, which has pushed up the strength of the yen.For big exporters such as Toyota Motor and Sony, this has reduced the value of their overseas profits when brought back into Japan.It has also made them less competitive overseas.Some of Japan’s big manufacturers have been shifting production to other countries to counteract this effect. – BBC