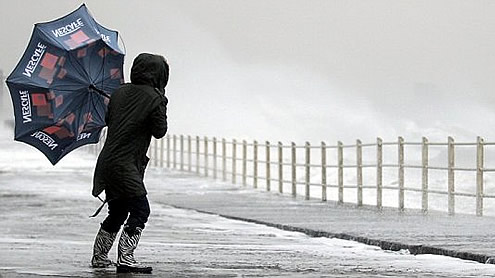 Weather warnings are in place as strong winds, heavy rain and snow move across the UK. The Met Office issued yellow “be aware” warnings for wind and rain for all regions except Eastern England and Orkney and Shetland.

It said this week will mark one of the stormiest periods of weather for several years. Winds closed part of the Tamar Bridge between Devon and Cornwall on Monday evening but it was later reopened. On Monday into Tuesday, the Met Office said heavy showers could fall as snow on hills above 100m in Scotland, Northern Ireland and the East Midlands. There may also be slushy accumulations of snow at lower levels and some roads will become icy, it says. Winds were already gusting in excess of 60mph in south-west England and the south coast on Monday evening. They were expected to move over the country and pick up strength again in the north.

The Environment Agency has flood warnings in place – meaning that flooding is expected and immediate action required – mainly around rivers in south-west England. In the south-west warnings have been issued for the River Wriggle, the River Dart from Buckfastleigh to Totnes, the River Torridge from Dolton to Bideford and the River Axe from Winsham to Axminster. In the north-east a warning was issued for the River Swale at the Brompton-on-Swale caravan park.

The Scottish Environment Protection Agency also issued flood warnings for areas in Argyll and Bute, Ayrshire and Arran and West Central Scotland. In Devon and Cornwall on Monday night, the Met Office warned that gusts could reach 70mph, with the potential to cause damage. Heavy rain was also expected, with conditions unlikely to improve until the early hours of Tuesday. The severe weather has resulted in the cancellation of Brittany Ferries services to and from France.

The Met Office says early indications suggest there is a potential for another storm system to affect parts of England and Wales later on Thursday and into Friday. Have you been affected by the severe weather? Are you in any of the areas where severe warnings have been issued? Send us your comments using the form below.  – BBC