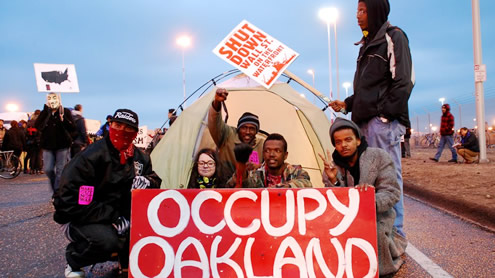 Hundreds of anti-Wall Street protesters have blocked gates and delayed lorries at three ports on the US West Coast.

The partial shutdown of harbours in California, Oregon and Washington states resulted in a handful of arrests, but no major clashes. From early on Monday, activists picketed gates, beat drums and carried signs with slogans such as “Shut Down Wall St on the Waterfront”. The rallies come a month after police dismantled Occupy camps across the US. Demonstrators said they hoped to hit the profits of the corporations that run the harbours.

In Oakland, California, about 150 workers were sent home as a result of the demonstrations, effectively closing two terminals. Scott Olsen, the Marine veteran who was injured during a clash between police and Occupy Oakland protesters in October, joined nearly 1,000 people marching to the city’s port on Monday evening. At Long Beach port, near Los Angeles, up to 300 protesters rallied at a terminal facility and scuffled with police. Two terminals were also shut in Portland, Oregon, where two people carrying a gun and a sword were arrested. Occupy spokeswoman Kari Koch said they were not affiliated with the rallies. Workers in Portland and at the port of Longview, Washington, were sent home over health and safety concerns. The longshoremen’s union did not officially back the protests, but employees were allowed to stay off the job if they felt conditions were unsafe. Demonstrators have previously targeted companies such as port operator SSA Marine, in which Goldman Sachs holds a large stake, and grain exporter EGT. In Vancouver, Canada, about a dozen people protested at that city’s port and a handful of people in Anchorage, in the US state of Alaska, also held a demonstration.

Monday’s demonstrations were the largest co-ordinated action by the Occupy movement since encampments were removed in cities across the US in recent weeks. Although they attracted far fewer people than the 10,000 who turned out at the beginning of November to shut Oakland’s port, organisers declared victory. Protester Boots Riley said. “We shut down the Port of Oakland for the daytime shift and we’re coming back in the evening. Mission accomplished.” But others said the action would hurt workers. “Disrupting port activities makes it harder for US manufacturing, the farm community and countless others to sell to customers and contribute to our nation’s economic recovery,” said EGT chief executive Larry Clarke. And Christian Vega, 32, who was stuck with a lorry-load of recycled paper at the port of Oakland, said the disruption would cost him several hundred dollars. “It only hurts me and the other drivers,” he told the Associated Press news agency. “We have jobs and families to support and feed. Most of them [protesters] don’t.” – BBC