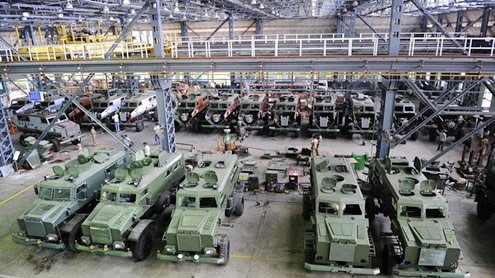 NEW DELHI: Defending long unresolved borders against two potentially hostile nuclear-armed neighbours does not come cheap. Besides, acquiring a wide array of weapon systems for billions of dollars, India will spend upwards of Rs 60,000 crore over the next five years on developing military infrastructure and capabilities for the western and eastern fronts.

If the cost of raising the already-sanctioned new mountain strike corps in the north-east is pegged at another Rs 60,000 crore and a conservative estimate of defence capital outlay in the 2012-2017 timeframe crossing Rs 4,00,000 crore are taken into account, it adds up to a staggering Rs 5,20,000 crore. This does not include the huge day-to-day cost of maintaining a 13-lakh armed forces. Defence minister A K Antony on Monday gave figures for the planned development of military infrastructure, with new fighter bases, helipads, bunkers, forward ammunition dumps and the like, to strategically counter China and Pakistan. Responding to queries on major projects of Military Engineer Services (MES) in Lok Sabha, Antony pegged the planned “development” of Army infrastructure and “improvement” of IAF infrastructure in the north-east at Rs 7,374 crore and Rs 1,753 crore, respectively.

Similarly, capability development along the northern borders will cost Rs 24,312 crore, while upgrade of storage facility for ammunition will come for Rs 18,450 crore. Construction of suitable habitat for soldiers deployed in high-altitude areas like Kargil, Siachen-Saltoro Ridge and Ladakh, which includes insulation, dome and fibre-glass based shelters, will cost another Rs 6,000 crore. Sources say the infrastructure coming up in the Eastern Army Command includes 5,572 “permanent defences and bunkers” along the Line of Actual Control with China as well as helicopter and drone bases at Missamari, Kumbhigram and Lilabari in Assam. This is in addition to IAF deploying Sukhoi-30MKI fighters in Tezpur and Chabua as well as progressively upgrading ALGs (advanced landing grounds) in Arunachal and eastern Ladakh.

The Army’s offensive punch will, however, come when the new mountain strike corps, with headquarters in Panagarh (West Bengal), takes concrete shape in the 12th Plan, with two new specially trained and equipped divisions under it. Two divisions, with 1,260 officers and 35,011 soldiers, with their HQs in Zakama (56 Div) in Nagaland and Missamari (71 Div) in Assam, have been raised over the last couple of years. Together, the four new divisions add up to around 75,000 troops. “For decades, our posture against China in North-East has been defensive. This is the first time we will have offensive capabilities in the mountains if they are needed,” said a source. They are needed, even if for deterrence. With five fully-operational airbases, an extensive rail network and over 58,000-km of roads in Tibet Autonomous Region (TAR), China is capable of rushing over 30 divisions (each with over 15,000 soldiers) at their “launch pads” on LAC in double-quick time, outnumbering Indian forces by at least 3:1 in the region. – Timesofindia