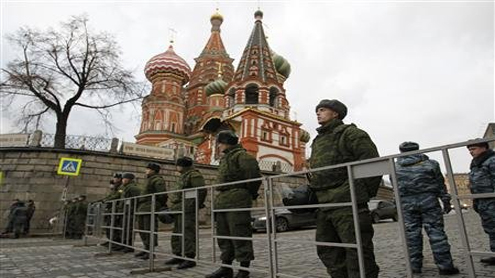 MOSCOW (Reuters) – President Dmitry Medvedev ordered an investigation on Sunday into allegations of fraud in Russia’s parliamentary election, one day after tens of thousands of protesters demanded it be annulled and rerun.

Medvedev responded on his Facebook site to the protesters’ complaints that the December 4 election, won by Prime Minister Vladimir Putin’s United Russia, was slanted in its favor.But he did not mention their calls for an end to Putin’s rule and received one insult after another on his Facebook site from people who made clear his reply was insufficient.”I do not agree with any slogans or statements made at the rallies. Nevertheless, instructions have been given by me to check all information from polling stations regarding compliance with the legislation on elections,” Medvedev said in a post on the social media site.His statement was a sign that the Russian leadership feels under pressure after the biggest opposition protests since Putin rose to power in 1999. The protesters themselves used social media to organize their rallies.

But the protesters have demanded much more than just an investigation and are unlikely to be satisfied.They want a rerun of the election, the sacking of Central Election Commission chief Vladimir Churov, the registration of opposition parties and the release of people they define as political prisoners.Within hours of his statement, Medvedev had received several thousand comments on his Facebook site, many of them negative, plenty of them disrespectful and some of them highly insulting.”We don’t believe you,” wrote Natalia Akhi.Irina Arapova asked: “And who’s going to do the checking? The executive authorities (United Russia)?”The next big day of protests is planned on December 24 when Alexei Navalny, one of the protest leaders, will have served a 15-day jail term received for his role in a protest last week.

Like Saturday’s protests, which followed big opposition rallies in Moscow and St Petersburg last week, the responses to Medvedev underlined how Russians’ faith in their leaders has fallen and that they are no longer afraid to show it.Anger over the election — which international monitors and the United States found fault with — unleashed years of pent-up frustration with Putin and his tight political controls. Frustration had mounted since September, when he announced plans to reclaim the presidency next year, opening up the possibility of him ruling until 2024.French Foreign Minister Alain Juppe said Russia’s leaders should allow demonstrations to go ahead and learn lessons from the election for next year’s presidential vote.

“People don’t like it when one plays with the democratic process. ‘I am Prime Minister, and I’ll leave you the Presidency’ and vice-versa… that’s something that ends up shocking people,” Juppe said on RFI radio.”We call on the Russian authorities to hold a dialogue, prevent violence, let the opposition demonstrate and learn the lessons for the organization of the next presidential elections.”In a sign the authorities are starting to sense the change of mood, city authorities across Russia allowed Saturday’s peaceful protests to go ahead and riot police hardly intervened.State television and other channels broadcast footage of Saturday’s big protest in Moscow, attended by tens of thousands, breaking a policy of showing almost no negative coverage of the authorities, although they included no criticism of Putin.

But there is no indication that Putin, Russia’s paramount leader, is about to bow to the protesters’ demands and most political experts still expect him to win the presidential election next March and swap jobs with Medvedev.He is likely now to look for ways to show he has registered their concerns but try to ride out the protests, hoping they will fizzle out as quickly as they began. A statement by Putin’s spokesman, Dmitry Peskov, gave no hint of concessions.
“We respect the point of view of the protesters, we are hearing what is being said, and we will continue to listen to them,” Peskov said.

“December 10, 2011 will go down in history as the day the country’s civic virtue and civil society was revived. After 10 years of hibernation, Moscow and all Russia woke up,” Boris Nemtsov, an opposition leader, wrote in his blog.”The main reason why it was such a big success is that a feeling of self-esteem has awakened in us and we have all got so fed up with Putin’s and Medvedev’s lies, theft and cynicism that we cannot tolerate it any longer … Together we will win!”It may not be that simple. The opposition has long been divided, most mainstream parties have little or no role in the rallies and keeping them up across the world’s largest country is hard at the best of times but especially in winter.Most Russian political experts say Putin, the former KGB spy who has dominated the world’s largest energy producer for 12 years, is in little immediate danger of falling, despite anger over widespread corruption and the gap between rich and poor.

But they say the 59-year-old leader’s authority has been damaged and may gradually wane after he returns as president unless he acts to address the new mood.”Putin has a formidable task. He has lost Moscow and St Petersburg, crucial cities where everything usually starts,” said political analyst and author Liliya Shevtsova. “He looks out of touch.”Putin, as president for eight years until 2008 and as prime minister since then, built up a strongman image by restoring order after the chaos in the decade after the Soviet Union’s collapse in 1991. But he no longer seems invincible.He could release the state’s purse strings to satisfy the financial demands of some critics but many of the protesters in Moscow are middle-class people demanding more fundamental changes, such as relaxing the political system he controls.His charges last week that the United States encouraged the protesters and financed them provoked scorn on the Internet. – news.yahoo