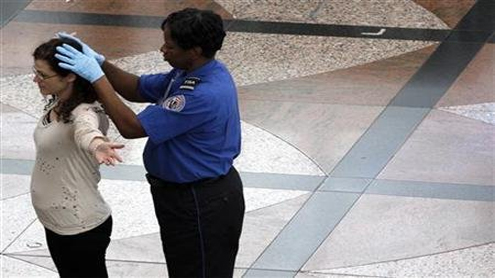 Senator Charles Schumer and State Senator Michael Gianaris told Homeland Security Director Janet Napolitano and TSA Administrator John Pistole in a letter that an on-site passenger advocate would help strike the right balance between security and protecting vulnerable travelers.”I appreciate the TSA’s work to keep air passengers safe, but passengers should not be humiliated and degraded during their travels,” Gianaris said in a statement accompanying the letter.

The call came after several elderly women came forward in the busy travel weeks around Thanksgiving to complain they were “strip searched by TSA agents”, including three at New York’s John F. Kennedy International Airport, the letter said.On Sunday, the TSA denied on its blog that the women had been strip searched.”TSA does not and has never conducted strip searches, and no strip searches occurred in any of these incidents,” the official statement posted by TSA blogger Bob Burns said.

He said the TSA was in the process of establishing a toll-free phone number dedicated to travelers who may require assistance during screening and which could be called to “get guidance and information about screening.”Schumer and Gianaris asked instead for a member of the screening crew to be trained as a passenger advocate who could intervene as problems arose. They also asked for an investigation into the women’s complaints, which were detailed in the letter.

In one case, the letter said, Lenore Zimmerman, 85, of Long Beach, New York, said TSA agents took her into a private room in late November to remove her back brace for screening after she decided against going through a scanning machine because of her heart defibrillator.”Zimmerman said she had to raise her blouse and remove her undergarments for a female TSA agent,” the letter said.The same day, Ruth Sherman, 88, of Sunrise, Florida, was asked about a visible protrusion from her waist band, which she identified as her colostomy bag.

She was “escorted to another room where two female agents made her lower her pants for an inspection. Sherman raised concerns that the agents would disrupt her colostomy bag, causing pain and potential damage,” the letter said.A third woman, Linda Kallish, of Boynton, Florida, said that after she revealed she was a diabetic with an insulin pump in her leg, she was escorted to a separate room where she was told to remove her pants so the agents could check the pump, the letter said, without saying when that incident took place.Last June, the daughter of Lena Reppert, 95, reported that TSA agents would not let her mother board a flight from Fort Walton Beach, Florida, to Detroit because her incontinence pad set off alarms, the letter said.

“We truly regret these passengers feel they had a bad screening experience,” the TSA said in its blog.The TSA blamed some of the problems on “a bit of miscommunication” and noted that JFK officers were receiving refresher training on “how to respectfully and safely screen passengers with disabilities or medical conditions.” -news.yahoo