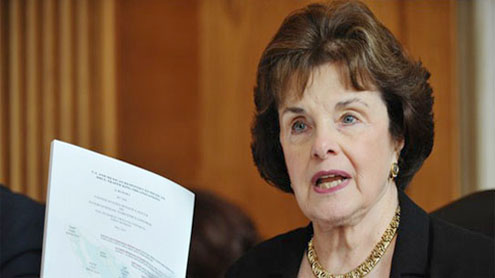 WASHINGTON: The US State Department on Tuesday defended aid to Pakistan amid calls from senators for a full review of whether economic and military assistance there serves the US national interest.

“We believe our assistance to Pakistan still continues to provide dividends for the American people in trying to grow and strengthen Pakistan’s democratic institutions, boost its economy,” said spokesman Mark Toner.“In the long term, you know, those are the kinds of things we’re seeking to achieve,” he told reporters one day after Republican Senators John McCain and Lindsey Graham made a full-throated call for reevaluating the aid.

His comments came shortly after US Senate Intelligence Committee Chair Dianne Feinstein said that cutting assistance to Pakistan would be unhelpful but warned that calls to do so had strong congressional support.“I don’t think that’s useful,” she told reporters. “My understanding is that there’s some overtures under way to restore the relationship. Well, that’s fine, but I suspect that if a bill were to come to the floor which fenced money, the bill would have a good chance of passing,”she said.

US lawmakers have expressed mounting anger at Pakistan, accusing military and intelligence officials there of supporting the Haqqani network blamed here for attacks on US forces and targets in Afghanistan.“I can only express my profound disappointment with the relationship” and the “deterioration” in an already troubled alliance that “goes up and down, and up and down, and up and down,” she said.“My very strong feeling is you can’t walk both sides of the street with respect to terror,” said Feinstein.“This is a very complex relationship,” Toner said, adding that the deadly border incident “was difficult for the Pakistani people, for the Pakistani government.”

“They have reacted in a way that shows how important and how significant this tragedy was for them,” Toner said.“It’s absolutely essential that Pakistan, Afghanistan and the US, other international partners, work through this and beyond. It’s in all our interests.”But Republican Senator Mark Kirk told AFP that McCain and Graham, who serve on the Senate Armed Services Committee, “are right.”

“Military aid to Pakistan is unsustainable, and in this time of deficits and debt, we ought to save the money,” he said, warning that if Pakistan has chose “to embrace terror and back the Haqqani network,” it should do so “without subsidies from the US taxpayer.Kirk has also called for bolstering ties to India and “making India a military ally of the United States and to encourage India to fill the vacuum in Kabul once we leave.” – Dawn