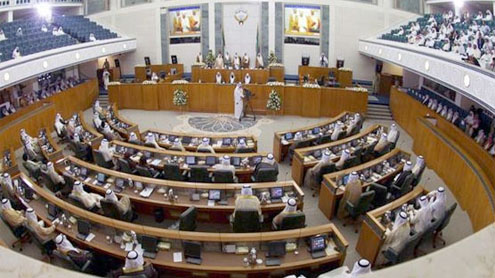 The decision by the emir, Sheik Sabah Al Ahmad Al Sabah, comes less than a week after he named a new prime minister and parliament sessions were put on hold. Elections must be held within 60 days.

which could complicate plans by the Pentagon to station thousands more U.S. soldiers in Kuwait as part of troop shifts around the region after the withdrawal from Iraq at the end of the month.Kuwait s tensions have roots years before the Arab Spring protests, but opposition factions could be further emboldened by the current push for reforms around the region. Critics of Kuwait s ruling family claim it turns a blind eye to allegations of widespread corruption and uses security forces to crush dissenting voices.

Kuwait s parliament has the most powers of any elected body in the Gulf, and opposition lawmakers openly criticize the ruling family.Last month, protest mobs stormed into parliament after debate over allegations that government officials funneled payoffs to bank accounts outside the country. Authorities quickly imposed stricter security measures.”Due to the deteriorating conditions that led to obstruction of process of achievements and threatened the country s higher interests, it became necessary to resort to the people to select their representatives, overcome existing obstacles and realize national interests,” said a statement by the emir carried on the official Kuwait News Agency.

Late last month, the emir selected Defense Minister Sheik Jaber Al Hamad Al Sabah as the new prime minister, replacing the long-serving Sheik Nasser Al Mohammad Al Sabah, who had survived several no-confidence votes in parliament and was the target of opposition groups calling for his dismissal.Kuwait also has been hit by a wave of strikes that grounded the state airline and threatened to disrupt oil shipments. The tiny Gulf nation has not been hit by major pro-reform demonstrations inspired by Arab uprisings, but Kuwait stands out in the region because of its hardball political atmosphere.

In January, the emir ordered 1,000 dinar ($3,559) grants and free food coupons for every Kuwaiti. Those handouts have been since dwarfed by other Gulf rulers trying to use their riches to dampen calls for political reform.Saudi Arabia s King Abdullah has pledged about $93 billion for more government sector jobs and services. In September, Qatar announced pay and benefit hikes of 60 percent for public employees and up to 120 percent for some military officers.Kuwaitis are used to a cradle-to-grave social security system that has increasingly become a burden on the government. – Dunyanews