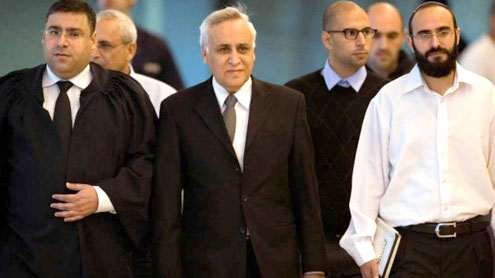 JERUSALEM: Israel’s former president, Moshe Katsav, heads to prison on Wednesday to begin serving a seven-year term for his conviction in a landmark rape case that both entranced and appalled the nation.

Katsav is expected to leave his home in the southern town of Kiryat Malachi on Wednesday morning and make the one-hour trek to Maasiyahu Prison, a minimum-security facility outside Tel Aviv. He becomes the highest-ranking former Israeli official ever to be placed behind bars.Katsav, 66, was convicted a year ago of raping a former employee while he was a Cabinet minister and sexually harassing two other women during his presidency, from 2000 to 2007. Katsav, who has repeatedly professed his innocence, remained free while he appealed. The Supreme Court upheld the conviction last month and ordered him to begin serving his sentence.Prison officials say Katsav will be placed in a special section of Maasiyahu reserved for observant Jews.

His conditions will be a far cry from the luxurious presidential mansion that he once inhabited.“Moshe Katsav will go to jail as planned tomorrow and will receive the same conditions as other prisoners,” Israel’s minister for internal security, Yitzhak Aharonovich, told Israel Radio.Prisons service spokesman Sivan Weizman said inmates in the religious section are woken at 4:30 a.m., attend morning prayers and spend most of their day in religious study. They have no access to television and receive family visits every two weeks. He is expected to share a cell with Shlomo Benizri, a former Cabinet minister convicted of accepting bribes.

After serving a quarter of his sentence, Katsav could become eligible for short furloughs and even apply to have his term shortened. But that would require him to admit to his crimes and express remorse — something he has refused to do, she said. Weizman said security would be beefed up around the president — both as part of a suicide watch placed on all new prisoners and to prevent other prisoners from harming him. Katsav’s own lawyers have expressed concerns that the distraught politician might try to harm himself.

The Katsav conviction has been hailed as a victory for women’s rights and equality under the law — particularly at a sensitive time when Israel’s court system, known as a protector of Israel’s liberal democracy, has come under assault from nationalists in the government.It also marked a tragic ending for a man whose rag-to-riches story had served as a symbol of success for Mizrachi Jews, those of Middle Eastern descent who have traditionally been an underclass in Israel.Katsav has said in recent interviews that he is a “wreck” while insisting he is innocent and the victim of a political witch hunt. He also has vowed to spend the rest of his life, if necessary, fighting to clear his name.

In the absence of forensic evidence, prosecutors built their case almost entirely on witness testimony. Legal experts say the similarities in the accounts of his victims, who did not know each other, likely led to the conviction, in which the judges accused Katsav of lying.Katsav has said that while he respects the judges’ decision, he believes they made a huge mistake by accepting his victims’ testimony over his own. “The justice of my cause will come to light — even if it is after my death,” he told the Yediot Ahronot daily last month.On Tuesday Israeli TV crews set up camp around Katsav’s home in the dusty southern town of Kiryat Malachi, waiting to broadcast live his trek to prison. Katsav has mostly remained holed up inside since the Supreme Court decision, though he ventured out on his birthday earlier this week to say goodbye to his daughter. Friends say he is devastated.

“This man today is spiritually broken, mentally squashed, financially collapsed. He is a shadow of himself today,” Yitzhak Tzuki, a friend of Katsav’s, told the Army Radio station on Tuesday.Israel’s presidency is a largely ceremonial office, typically filled by a respected elder statesman expected to rise above politics and serve as a moral compass. Most political power is concentrated in the hands of the prime minister. The case against Katsav, which broke in 2006 after he told police one of his accusers was trying to extort money from him, shocked Israelis by portraying a man who had been widely considered a bland functionary as a predatory boss who repeatedly used authority to force sexual favors.

The lurid details of the case riveted Israelis. In one memorable moment, Katsav held a news conference in which he accused prosecutors and the media of plotting his demise because he didn’t belong to the European-descended elite.Katsav reluctantly resigned two weeks before his seven-year term was to expire in 2007 under a plea bargain that would have allowed him to escape jail time.He was replaced by Nobel peace laureate and former prime minister Shimon Peres. But he then rejected the plea bargain, vowing to prove his innocence in court.Katsav told the Maariv daily last month that he is “at peace” with his decision to reject the plea deal. “I couldn’t live with the knowledge that I would have to confess to an offense I didn’t commit,” he said. – Khaleejnews