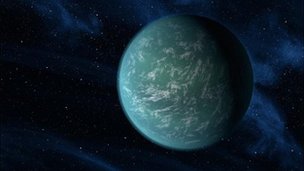 Astronomers have confirmed the existence of an Earth-like planet in the “habitable zone” around a star not unlike our own.The planet, Kepler 22-b, lies about 600 light-years away and is about 2.4 times the size of Earth, and has a temperature of about 22C.

It is the closest confirmed planet yet to one like ours – an “Earth 2.0”.However, the team does not yet know if Kepler 22-b is made mostly of rock, gas or liquid.During the conference at which the result was announced, the Kepler team said that it had spotted some 1,094 new candidate planets.The Kepler space telescope was designed to look at a fixed swathe of the night sky, staring intently at about 150,000 stars. The telescope is sensitive enough to see when a planet passes in front of its host star, dimming the star’s light by a minuscule amount.Kepler identifies these slight changes in starlight as candidate planets, which are then confirmed by further observations by Kepler and other telescopes in orbit and on Earth.

Kepler 22-b was one of 54 candidates reported by the Kepler team in February, and is just the first to be formally confirmed using other telescopes.More of these “Earth 2.0” candidates are likely to be confirmed in the near future, though a redefinition of the habitable zone’s boundaries has brought that number down to 48.Kepler 22-b lies at a distance from its sun about 15% less than the distance from the Earth to the Sun, and its year takes about 290 days. However, its sun puts out about 25% less light, keeping the planet at its balmy temperature that would support the existence of liquid water.

The Kepler team had to wait for three passes of the planet before upping its status from “candidate” to “confirmed”.”Fortune smiled upon us with the detection of this planet,” said William Borucki, Kepler principal investigator at Nasa’s Ames Research Center.”The first transit was captured just three days after we declared the spacecraft operationally ready. We witnessed the defining third transit over the 2010 holiday season.”The results were announced at the Kepler telescope’s first science conference, alongside the staggering number of new candidate planets. The total number of candidates spotted by the telescope is now 2,326 – of which 207 are approximately Earth-sized.In total, the results suggest that planets ranging from Earth-sized to about four times Earth’s size – so-called “super-Earths” – may be more common than previously thought. – BBC