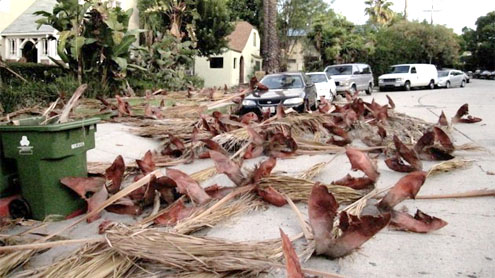 Calif: The most powerful winds to tear across California in years kept 9-year-old Dalen Guyton up late into the night. Then, around midnight, came the boom.

The great yawning tree that stood next to his grandmother’s house, the one with the rope swing he and his sisters played on, had toppled, coming within inches of their one-story home.On Thursday, the siblings stood out front surveying the damage, like thousands across the West where high winds toppled countless trees, knocked out power to hundreds of thousands and brought gusts of 123 mph.”If she pays someone to clean it up, it’s not going to be a good Christmas,” said the boy, who was wearing a Santa hat. “She’s not going to be able to get any presents.”

The National Weather Service called Southern California’s winds Wednesday night a once-in-a-decade event, and it’s not over. Winds were expected to pick up again Thursday night, though they won’t be as fierce.In the mountains, winds were expected to gust up to 65 mph into Friday morning and 50 mph in the valleys.High wind warnings and advisories were also issued for Utah, Nevada, Wyoming, Arizona and New Mexico. The blustery weather is expected to eventually hit Oklahoma, Missouri and Indiana.The storms were the result of a dramatic difference in pressure between a strong, high-pressure system and a cold, low-pressure system, meteorologists said. This funnels strong winds down mountain canyons and slopes.

The winds reached 123 mph at a ski resort northwest of Denver and topped 102 mph in Utah.California, however, was the hardest hit, with more than 330,000 utility customers still without power late Thursday. The gusts were blamed for toppling semitrailers and causing trees to fall on homes, apartment complexes and cars.A state of emergency was declared in Los Angeles County, where schools in a dozen communities were closed.In some neighborhoods, concrete light poles cracked in half. Darkened traffic signals and fallen palm tree fronds and branches snarled traffic. At a Shell station, the roof collapsed into a heap of twisted metal.”It was a terrifying ride for me, coming here in pitch dark … and watching motorists take no notice of lights being out,” said Bob Spencer, a spokesman for the Los Angeles County Department of Public Works.

The last time that Southern California was battered by such intense winds was in January 2007, when similarly high gusts toppled trees and made a mess.Bill Patzert, a climate expert with NASA’s Jet Propulsion Laboratory, lives in Sierra Madre and, like hundreds of thousands of people across the region, lost power at his home. A heavy tree limb blocked his driveway.He estimated winds peaked between 80 to 90 mph in his neighborhood overnight.”It was like being in a hurricane. I thought I was going to blow away,” he said.

In heavily damaged Pasadena, schools and libraries closed and a local emergency, the first since 2004, was declared. Officials said 40 people were evacuated from an apartment building after a tree smashed part of the roof.Pasadena is known for its historic homes and wide oak-lined streets that are frequently depicted in films.Many residents Thursday blamed the city for protecting its old trees from over-trimming to such an extent that they have now become a public safety hazard.Vince Mehrabian, the general manager at A&B Motor Cars, estimated eight Lexus, Cadillac and other luxury cars had been destroyed by fallen limbs. He said he’d been asking the city for four years to trim the trees more.

On a street around the corner, almost every tree was either cracked in half or missing limbs.Elsewhere, Daphne Bell, a 30-year Pasadena resident, said she was kept awake by howling wind. “This is the worst, the absolute worst. There were times it sounded like a freight train was roaring down my driveway,” she said.Similar stories of downed trees and power lines echoed across the West, where winds in some areas ripped storefront awnings, filled gutters with debris and forced school closures.High winds ripped through Utah, overturning several semi-trucks on or near Interstate 15. About 50,000 customers lost power along the state’s 120-mile Wasatch Front as high winds took down power lines, but service was restored to more than half of them by Thursday night.

Police asked schools to close in Centerville, where a 102-mph gust was reported. Mail delivery and trash pickup were canceled.In Nevada, weather officials warned that blowing dust was creating visibility problems on a highway between Reno and Las Vegas.In Steamboat Springs, Colo., the roof of a four-story condominium complex was blown off and about 100 trees were knocked over, some landing on homes. A ski area shut down its lifts after a gust of 123 mph.Even some weather experts were surprised by the wind’s force.”It’s one of the strongest events that I can remember,” said Brian Edwards, a meteorologist with Accuweather. “It’s rather rare.” – Yahoonews