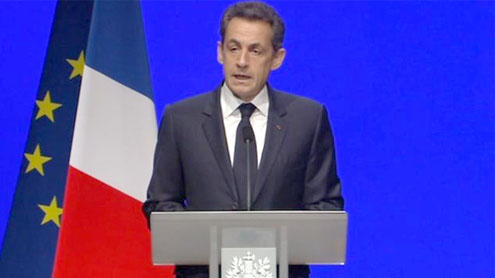 The French President, Nicolas Sarkozy, has said France and Germany must come together to ensure stability at the heart of Europe.

In a major speech in the port of Toulon, Mr Sarkozy said he and the German Chancellor, Angela Merkel, would meet on Monday to propose measures to “guarantee the future of Europe”.He warned that economic convergence would be long and difficult.But he promised that France would not give up its sovereignty.He said the euro could not continue to exist unless eurozone economies pulled together.

Europe had to be “refounded” he said, with France and Germany at its heart to ensure “a zone of stability”.”We must confront those who doubt the stability of the euro and speculate on its break-up with total solidarity.”France is fighting so that Europe can still make its voice heard in the world of tomorrow,” he said.Stricter financial discipline was needed, he added, with more severe sanctions for countries which did not meet their responsibilities.Mr Sarkozy also made a robust defence of measures he had already introduced to tackle France’s debts.

He said the country had to end doubts about its ability to pay, in order to avoid being targeted by speculators.Mr Sarkozy said Europe’s response to the debt crisis had not been fast enough.He said Germany and France had agreed that there should be a new European treaty to govern the relations between countries.However, he rejected German suggestions that national budgets could be approved and regulated in Brussels.The BBC Paris correspondent, Christian Fraser, says the French president’s speech was a sombre assessment of the eurozone crisis and an acknowledgement that eurozone leaders had not worked quickly enough to solve the problems.

Mr Sarkozy has previously expressed the belief that a two-speed European Union is inevitable, arguing that full economic integration will be impossible as the EU expands to more than 30 members.In a speech in November he said “there will be a two-speed Europe: one speed that moves toward more integration in the eurozone and one speed for a confederation in the EU.”The French president’s speech in Toulon comes amid warnings by analysts that France could lose its triple-A credit rating, due to its exposure to the European debt crisis.

Mr Sarkozy will meet the British Prime Minister, David Cameron, in Paris on Friday.Britain is concerned about the possible impact of a two-speed Europe in which it could be left on the margins along with other countries outside the euro.European Union leaders will hold a summit in Brussels next week, which is seen by many analysts as a crucial moment in efforts to tackle the debt crisis. – BBC