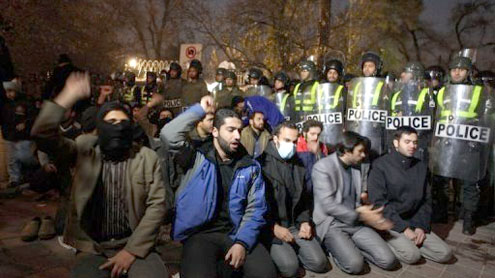 The government expelled all Iranian diplomats and shut its embassy in Tehran after the mission was attacked by protesters angry at fresh sanctions against the Islamic republic’s nuclear programme.

Iran warned Britain of “repercussions” and urged other European Union nations not to follow suit, although several including France, Germany and the Netherlands said they were recalling their envoys for consultations.Foreign Secretary William Hague accused the Iranian government of tacit support for Tuesday’s attack by hundreds of demonstrators, though he stopped short of cutting diplomatic ties altogether.

“If any country makes it impossible for us to operate on their soil they cannot expect to have a functioning embassy here,” Hague said in a speech to parliament.To cheers from MPs, Hague said he had ordered all Iranian embassy staff to leave Britain within 48 hours and closed the mission in London immediately.All Britain-based staff had also been evacuated from the embassy in Iran for their safety and the mission had been shut just minutes before he spoke, he added.Newspapers on Thursday unanimously backed the government’s decision.

“When British diplomats are not safe in Iran, Iranian diplomats should not be welcome here,” said The Times editorial, accusing Iran of holding itself to lower standards than Genghis Khan.The centre-right Daily Telegraph called on the European Union to “stand alongside Britain in imposing tough sanctions on Tehran”.The protests in Tehran were called to vent anger over Britain’s announcement last week it was halting all transactions with Iran’s financial system, including its central bank.Iranian officials this week retaliated by passing a law to expel the British ambassador within days, as diplomatic ties were downgraded.

Prime Minister David Cameron had earlier promised “very tough action” following the violent scenes when around 200 protesters rampaged for hours through Britain’s two diplomatic compounds in Tehran.They tore down the Union flag, ripped up pictures of Queen ElizabethI, trashed embassy offices, set documents alight and briefly blocked the movements of six diplomats.Iranian police, who initially appeared to do little to prevent the violence, eventually forced protesters to leave after firing tear gas and clashing with them, Hague said.

“The idea that the Iranian authorities could not have protected our embassy or that this assault could have taken place without some degree of regime consent is fanciful,” he said.But the British actions did “not amount to the severing of diplomatic relations in their entirety,” he said.”It is action that reduces our relations with Iran to the lowest level consistent with the maintenance of diplomatic relations”.Tensions is already high between the West and Iran over Tehran’s nuclear programme, which it insists is only for civilian purposes.

EU foreign ministers will hold talks Thursday on issues including Iran, with Britain believed to be pushing for coordinated action that could include oil sanctions.France, Germany and the Netherlands all said Wednesday they were recalling their ambassadors to Iran for “consultations”.Norway temporarily closed its embassy amid concerns over security. Sweden summoned the Iranian ambassador.The UN Security Council, the United States, the European Union and even Iran’s ally Russia all condemned the assault on the British embassy.

Iran’s foreign ministry had earlier expressed regret over the incident, and a senior policeman was quoted as saying that some protesters had been arrested.But parliamentary speaker Ali Larijani defended the protesters, saying they had been angered by the British government and “decades of domineering moves by the British in Iran”.Britain’s sanctions against Iran’s financial system were announced in conjunction with similar measures by the United States and Canada following a UN report which crystallised fears about Tehran’s nuclear programme.Protests against Western embassies are frequent in Tehran, but the storming of the British embassy was by far the worst since 1979, when Islamic students broke into the US embassy, taking 52 Americans hostage for 444 days.That act resulted in the breaking of all diplomatic ties between the United States and Iran. – Yahoonews