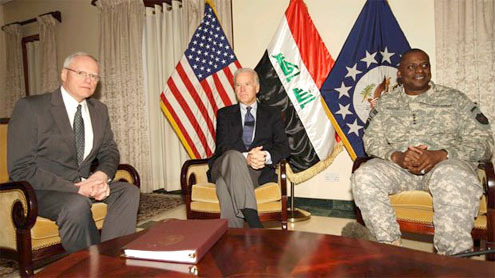 BAGHDAD: Vice President Joe Biden said Wednesday that his trip to Baghdad ahead of the US military pullout marks a new beginning between Iraq and the United States, but protests in Iraq against his visit demonstrated the difficulties the relationship will face.

Biden landed in Baghdad Tuesday in a surprise visit to Iraq at a pivotal time as the last of the American troops withdraw, and the US must establish a new relationship with a country that is home to billions of barrels of oil reserves and more closely aligned with neighboring Iran than the US would like.In comments surrounding his meetings with Prime Minister Nouri Al-Maliki, Biden stressed that the US and Iraq will continue to have a relationship long after the American troops have left the country.

“Our troops are leaving Iraq, and we are working on a new path together, a new face of this partnership,” he added. “This is marking a new beginning of the relationship that will not only benefit the United States of America and Iraq. I believe it will benefit the region and will benefit the world.”Biden said that people in both countries have had to overcome misperceptions about the relationship. He said people in the US still ask whether it is worth it to spend so much energy and money in Iraq, a country where 4,485 American military personnel have died and tens of thousands of Iraqis have been killed.“We have jointly demonstrated, it is worth it, it is worth it — as costly and as difficult and sometimes as controversial as it is,” he said.

Many Iraqis, suspicious of American intentions in the region, have wondered why the US is keeping such a large presence here, while Americans have questioned the prudence of spending money in Iraq while the US is experiencing financial problems of its own.Biden said the US needs to have experts in a wide range of areas “on hand, in country.” The US will also have thousands of security contractors to protect the embassy’s facilities in Baghdad, Kirkuk, Irbil and Basra, as well as diplomatic personnel.Iraq’s development, Biden said, “will bring stability to the region. That is our sole interest in Iraq. Period. End of story.”

Biden also stressed that the new relationship with Iraq will include a robust security relationship, although few details of that were given.Baghdad and Washington failed earlier this year to come to an agreement on keeping a small American military presence in Iraq next year, meaning all US forces must be out of the country by Dec. 31. The talks faltered on Baghdad’s insistence that the US troops be subject to Iraq’s legal system, something that Washington adamantly rejected.Some 13,000 US troops remain, down from a one-time high of about 170,000.

Al-Maliki said the meetings Wednesday were designed to lay the ground for future cooperation and partnership.“We’ve passed a very difficult page of confronting Al-Qaeda and terrorism in Iraq during which we achieved joint success … We made many sacrifices from both sides,” Al-Maliki said.Alluding to the turmoil going on in the Middle East, Al-Maliki also said the region is “sensitive” and that as changes occur, there should be cooperation between the US and Iraq.

One area in which Baghdad and Washington have been on different sides of the argument is Syria. While Washington has harshly criticized Syrian President Bashar Assad’s bloody crackdown on protests that has killed more than 3,500 people so far, Baghdad has taken a more conservative approach and did not support Arab League sanctions against its western neighbor.Biden met later with Iraqi President Jalal Talabani and Parliament Speaker Osama Al-Nujaifi, during his eighth visit to Iraq since being elected.The White House said he was also scheduled to take part in a ceremony commemorating the sacrifices of US and Iraqi troops during the eight-year war.

There were no meetings with some of Al-Maliki’s key allies, government leaders loyal to anti-American cleric Muqtada Al-Sadr. Al-Maliki is navigating a tough position of trying to maintain a relationship with the US, from whom Iraq is buying billions of dollars in weapons in the coming years, and Al-Sadr, whose backing last year ensured Al-Maliki a second term.Followers of Al-Sadr rallied in Basra and Baghdad on Wednesday, chanting “Biden get out of Iraq,” and “No to America.”

Security was tight for Biden’s visit, which was not announced in advance.In the week leading up to the vice president’s trip, Iraq has seen an increase in violence that has renewed concerns about the capabilities of the country’s security forces.Late Wednesday, gunmen stormed the house of a anti-Al-Qaeda cleric in Samarra, 60 miles (95 kilometers) north of Baghdad, an Iraqi security official said. The gunmen killed five people inside, including the cleric.The official spoke on condition of anonymity because he was not authorized to speak to reporters. – Arabnews