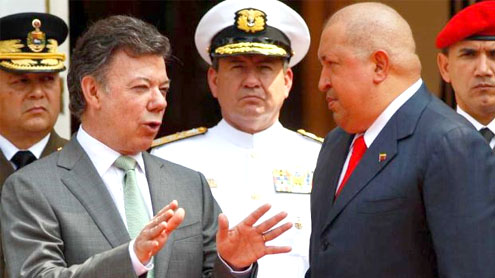 One of Colombia’s most-wanted men, Maximiliano Bonilla Orozco, has been captured in Venezuela.

Better known under his alias Valenciano, he is accused of smuggling tonnes of cocaine from Colombia to the United States.American officials had offered a $5m reward for information leading to his capture.Colombian President Juan Manuel Santos has praised his Venezuelan counterpart, Hugo Chavez, for the arrest.President Santos was speaking ahead of a summit with President Chavez in the Venezuelan capital, Caracas.

He described Valenciano, 39, as a “high value target for Colombia, and the entire world”.The Colombian security forces accuse him of leading a drug gang based in the Colombian city of Medellin.The gang, known as The Office, was once the armed wing of Pablo Escobar’s drug trafficking ring and took over many of its operations after his death in 1993, Colombian officials say.Valenciano is accused of managing a 1,500-strong gang controlling the main drug trafficking routes from Colombia through Guatemala, Honduras and Mexico, to the United States.

Both President Chavez of Venezuela and President Santos of Colombia hailed Valenciano’s arrest as an example of successful security collaboration.He was seized by Venezuelan forces in the northern state of Aragua with the help of intelligence provided by Colombian police.President Chavez said: “Under no circumstance have we or will we allow drug trafficking, paramilitary or armed groups of any kind to violate our territory.”

In 2010, relations between Colombia and Venezuela broke down when then Colombian President Alvaro Uribe accused Venezuela of harbouring left-wing Farc guerrillas.Relations between the two neighbours have improved markedly since President Santos came to power in August 2010.President Chavez said Valenciano would be taken to the Venezuelan capital, Caracas, to be handed over to Colombian authorities. – BBC