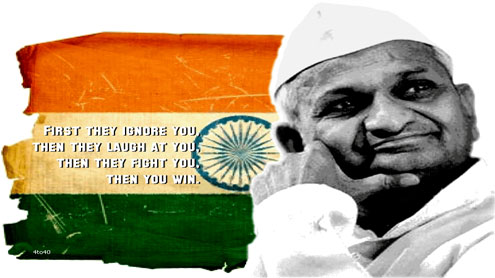 NEW DELHI: In a reminder of the August agitation at Ramlila Maidan, commuters on Monday were greeted to anti-corruption slogans in parts of Delhi announcing that Team Anna was back, stepping up pressure on the government for a strong Lokpal bill.

Activist Anna Hazare on Monday said he would sit on a day-long dharna at Jantar Mantar on December 11, and the group has sought permission for Ramlila Maidan from December 27.

“Please join the dharna at Jantar Mantar on December 11 for a strong Jan Lokpal,” Hazare was quoted as saying by his close aide Suresh Pathare.

The parliamentary panel looking into the Lokpal bill is likely to submit its report before December 7. The draft report will be circulated and discussed among members on November 30. Team Anna has been insisting that lower bureaucracy, higher judiciary, citizens’ charter and setting up of Lokayuktas at the state level be included in the bill.Team Anna member Arvind Kejriwal said the group was prepared to protest and had sought permission from MCD for Ramlila Maidan. The permission is conditional and Team Anna will be allowed after Delhi Police gives a no-objection certificate. However, MCD’s standing committee chairman Yogendra Chandolia said no permission had been given yet.

Team Anna member Manish Sisodia said, “We have sought permission from MCD from December 27 and we have been granted permission to use the ground till January 5.”Hazare’s plan to hold a day-long protest is being seen as an effort to build pressure among political parties to take up the issues that are likely to be excluded by the parliamentary panel in its report.

According to standing committee chairman Abhishek Manu Singhvi, 25 issues including those concerning media, corporate, NGOs, lower bureaucracy and citizens’ grievances have been “comprehensively dealt with” by the panel.The committee scrutinizing the Lokpal bill had on November 24 ended its internal deliberations with “broad consensus” on most of the issues including on giving constitutional status to Lokpal.

Team Anna member Neeraj said the Delhi Police was approached for permission to hold protest at Ramlila Maidan from December 27 to January 5. – Timesofindia