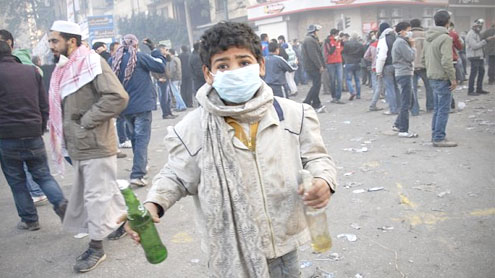 CAIRO: Egyptian protesters and police observed a truce on Thursday after clashes that killed 39 people in five days, but activists said they would intensify pressure for an end to army rule with a mass rally on Friday.

The ruling army council again promised that parliamentary elections would start on time next week. It said earlier it would speed up the timetable for a handover from military to civilian presidential rule.Demonstrations by thousands of Egyptians frustrated with military rule have led to violent clashes with police in and around Cairo’s Tahrir Square, in scenes reminiscent of the popular uprising that toppled Hosni Mubarak in February. “The people demand the execution of the marshal,” crowds chanted, referring to army chief Field Marshal Mohamed Hussein Tantawi, who was Mubarak’s defence minister for 20 years.

In a communique, protesters called a million-man march on “the Friday of the last chance” to back demands for an immediate transfer to civilian rule via a national salvation government.The Egyptian Independent Trade Union Federation called for a workers’ march to Tahrir. Another labour rights group called for a general strike to back the protests. Labour unions played an important role in the movement that toppled Mubarak.The heads of two political parties who took part in a meeting with the military council on Tuesday said they now regretted attending and apologised to the protesters in Tahrir.

The demonstrations appear to have polarised Egyptians, many of whom worry that unrest will prolong economic stagnation.Supporters of the army council had said they would hold a rally to back the military. In a statement on its Facebook page, the army council said it was “appealing to them to cancel the demonstration”, saying it wanted to avoid divisions.In fresh blows to confidence, the Egyptian pound weakened to more than six to the dollar for the first time since January 2005, and Standard & Poor’s cut Egypt’s credit rating.The agency cut Egypt’s long-term, foreign- and local-currency sovereign credit ratings to B+ from BB-, saying a “weak political and economic profile” had worsened further.

The Central Bank raised interest rates unexpectedly in what bankers was an attempt to shore up the pound.Egypt’s ruling army council said it was doing all it could to prevent more violence. In a statement, it apologised, offered condolences and compensation to families of the dead, and promised a swift investigation into who was behind the unrest.A ruling council member, General Mamdouh Shaheen, told a news conference the parliamentary vote, whose first stage is due to begin on Monday, would go ahead on time. “We will not delay elections. This is the final word,” he said.Another council member, Major-General Mokhtar al-Mullah, took a swipe at the demonstrators. “If we look at those in Tahrir, regardless of their number, they do not represent the Egyptian people, but we must respect their opinion,” he said.

Mullah said the army hoped to form a new government before Monday to replace Prime Minister Essam Sharaf’s cabinet, which resigned during this week’s violence without giving a reason.Demonstrators in Tahrir said the truce had taken hold from midnight. Cranes hauled concrete barriers, later reinforced with barbed wire, across streets leading to the nearby Interior Ministry, flashpoint for much of the recent violence.Protesters linked arms in human chains to prevent further clashes with security forces guarding the Interior Ministry.“We have created a space separating us from the police. We are standing here to make sure no one violates it,” said Mahmoud Adly, 42, part of a human cordon four people deep.

Some demonstrators began sweeping the square and collecting rubbish. “We want to show people we aren’t here only for clashes, we are also cleaning the place,” said Osama Moawad, 23.The protests in Cairo and elsewhere pose the gravest challenge to Egypt’s army rulers since they took over from Mubarak, overthrown on Feb. 11 after an 18-day uprising.

The United States and European nations, alarmed at the violence of the past few days, have urged Egypt to proceed with what has been billed as its first free vote in decades.The army and the Muslim Brotherhood, which expects to do well in the election, say it must go ahead, but many protesters do not trust the military to oversee a clean vote. Some scorn the Brotherhood for its focus on gaining seats in parliament.

In Tahrir, two groups were chanting against other, one saying, “Muslim Brotherhood, we don’t want you in the square,” and another responding in a unity call, “One hand, one hand.”The military council originally promised to return to barracks within six months of the fall of Mubarak, but then set a timetable for elections and drawing up a new constitution that would have left it in power until late next year or early 2013.Tantawi pledged this week to hold a presidential vote in June that could pave the way for a transfer to civilian rule, but the demonstrators, angered by army attempts to shield itself legally from future civilian control, are unconvinced.

“The protesters of Tahrir Square announce their absolute rejection of … Tantawi’s speech, and stress they have been humiliated that the regime moved to offer solution only after martyrs fell,” the protesters’ communique said.Before the truce, protesters had fought running battles with security forces around the Interior Ministry. The bloody chaos there contrasted with normal life in streets nearby. – Kahleejnews