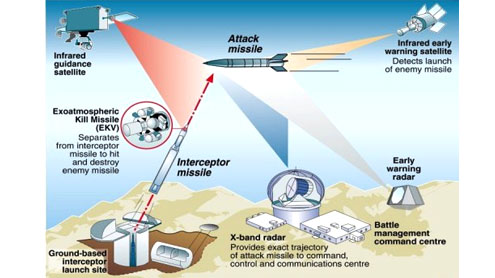 WASHINGTON: The United States will not alter its plans to deploy a NATO missile defense system in eastern Europe, a White House official said Wednesday, adding Russia should not be threatened by the shield.

“In multiple channels, we have explained to Russian officials that the missile defense systems planned for deployment in Europe do not and cannot threaten Russia’s strategic deterrent,” National Security Council spokesman Tommy Vietor said.He was speaking after Russia warned the West that it could deploy missiles on the EU’s borders to strike against the missile defense facilities that the United States plans to install in eastern Europe.

President Dmitry Medvedev said Russia was prepared to deploy Iskander missiles, which officials said have a range of up to 500 kilometres (310 miles), in the Kaliningrad exclave that borders EU members Poland and Lithuania.Romania and Poland have agreed to host part of a revamped US missile shield which Washington said is aimed solely at “rogue” states like Iran but Moscow believes would also target its own capability.

NATO member Turkey has also decided to host an early warning radar at a military facility near Malatya in the southeast as part of the missile defense system.Vietor said the implementation of the missile system “is going well and we see no basis for threats to withdraw from it.”

“We continue to believe that cooperation with Russia on missile defense can enhance the security of the United States, our allies in Europe, and Russia, and we will continue to work with Russia to define the parameters of possible cooperation,” he added.“However, in pursuing this cooperation, we will not in any way limit or change our deployment plans in Europe.”  – Khaleejnews