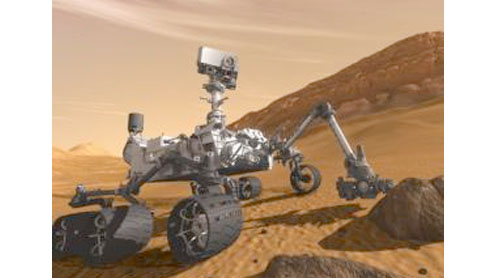 Florida: As big as a car and as well-equipped as a laboratory, NASA’s newest Mars rover blows away its predecessors in size and skill.

Nicknamed Curiosity and scheduled for launch on Saturday, the rover has a 7-foot (2-meter) arm tipped with a jackhammer and a laser to break through the Martian red rock. What really makes it stand out: It can analyze rocks and soil with unprecedented accuracy.“This is a Mars scientist’s dream machine,” said NASA Jet Propulsion Laboratory’s Ashwin Vasavada, the deputy project scientist.Once on the red planet, Curiosity will be on the lookout for organic, carbon-containing compounds. While the rover can’t actually detect the presence of living organisms, scientists hope to learn from the $2.5 billion, nuclear-powered mission whether Mars has — or ever had — what it takes to nurture microbial life.

Curiosity will be “the largest and most complex piece of equipment ever placed on the surface of another planet,” said Doug McCuistion, director of NASA’s Mars exploration program.Ten feet (2 meters) long, 9 feet (2.75 meters) wide and 7 feet (2 meters) tall at its mast, Curiosity is about twice the size of previous rovers Spirit and Opportunity, weighs 1 ton and is loaded with 10 science instruments. Its formal name: Mars Science Laboratory, or MSL.In a spacecraft first, Curiosity will be lowered to Mars’ surface via a jet pack and a tether system similar to the sky cranes used by helicopters to insert heavy equipment in inaccessible spots on Earth. No bouncing air bags like those used for the Mars Pathfinder lander and rover in 1997 and for Spirit and Opportunity in 2004 — Curiosity is too heavy for that.

It is the kind of precision landing that officials said will benefit future human explorers on Mars.The rover is scheduled to arrive at the mineral-rich Gale Crater next August, 8½ months after embarking on the 354-million-mile (570-million kilometer) voyage aboard an Atlas V rocket.It’s a treacherous journey to Mars, and the road is littered with failures. In all, more than three dozen missions have aimed over the decades at the most Earth-like planet known, and fewer than half have succeeded. Of this flotilla, only one lander is still working on the dry, barren, cold surface — Opportunity — and only three craft still are observing the planet from orbit.

In fact, Russia’s latest Mars probe remains stuck in orbit around Earth two weeks after its botched launch. NASA has had better luck at Mars, although it has lost a few spacecraft there.“Mars is difficult, and so many things have to go right for a mission to work,” said Michael Meyer, lead scientist for NASA’s Mars exploration program.Curiosity is the capstone of what NASA calls the year of the solar system. A spacecraft is en route to Jupiter after lifting off last August from Cape Canaveral, and twin lunar probes launched in September will arrive at the moon New Year’s weekend.A huge crowd — 13,500 invited guests — is expected for Curiosity’s Thanksgiving holiday weekend send-off.

There will be more anxiety than usual over the launch. Curiosity holds 10.6 pounds (4.8 kilograms) of plutonium, more than enough to power the rover on the Martian surface for two years. A nuclear generator won out over solar energy because it allows for a bigger workload and more flexibility. The plutonium is encased in several protective layers in case of a launch accident.Once safely down on Mars, the rover will survey the landscape with high-definition and laser cameras mounted like eyes atop its mast. The laser will aim at soil and rocks as far as 20 feet (6 meters) away to gauge their chemical composition.The rover also has a weather station for updates on Martian temperature, humidity and wind, as well as a radiation detector that will be especially useful for planning human expeditions.

Despite all its fancy upgrades, Curiosity will go no faster than the one-tenth-mile-per-hour logged by past Martian rovers. But it is expected to venture more than 12 miles (20 kilometers) during its two-year mission. If it’s still working after that, it will keep on trucking, possibly all the way up the crater’s 3-mile (5-kilometer) peak.The next logical step in Mars exploration, said Cornell University’s Steve Squyres, who led the science team for Spirit and Opportunity, would be a robotic mission to deliver Mars samples to Earth for analysis. NASA hopes to pull that off later this decade, but the project is on Congress’ chopping block.Squyres warned that without such missions, U.S. leadership in science won’t just be challenged — “it’s going to go away.” – Kahleejnews