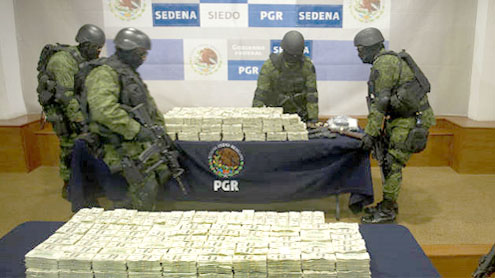 Mexico City: Mexico’s military has seized more than $15.3 million in cash from a vehicle in the border city of Tijuana, authorities said Tuesday.

In addition to the money, troops also found jewelry and packages of cocaine in the vehicle, the Attorney General’s Office said in a statement.Soldiers found the stash during patrols Friday, the statement said.Authorities believe the vehicle was heading to a home used as a financial hub by the Sinaloa Cartel, the statement said.

On Tuesday, officials showed reporters in Mexico City stacks of $100 bills that they said were seized in the operation.The cash is the second largest quantity of money the Mexican military has seized since President Felipe Calderon took office in December 2006, the statement said. In 2008, soldiers seized more than $26 million in Sinaloa state.Calderon announced a government crackdown on cartels shortly after taking office. – CNN