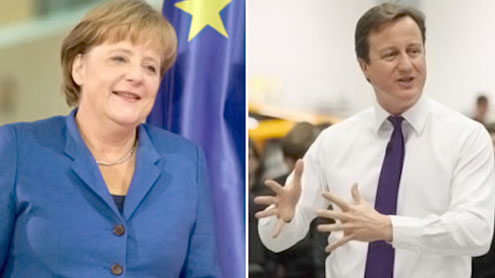 The two leaders are meeting in Berlin amid rising tensions over Britain’s refusal to back a new tax on bank transactions to help regulate markets.Germany is also pushing for greater European integration to avoid future problems but Mr Cameron is under pressure from his party to extract something for Britain in return.Their summit comes after violence broke out in Athens and across Italy as anger caused by economic strife spilled onto the streets.

The Prime Minister is said to be ready to back plans to strengthen economic union in the eurozone in return for safeguards to protect the City of London from European legislation, according to the Financial Times. The Prime Minister will first hold breakfast talks in Brussels with European Commission president Jose Manuel Barroso and European Council president Hermany Van Rompuy.

This will focus on how to push for tougher austerity measures in crisis-hit eurozone economies and how to “leverage” a current bailout fund without actually adding in more money.Eurozone countries have been angered by Britain’s involvement in discussions about the crisis and Mr Cameron needs to tread a fine line to avoid the rift deepening.Mrs Merkel is furious that Mr Cameron and Chancellor George Osborne have flatly refused to consider a transaction tax, which it is claimed will help ease the burden on taxpayers by generating billions a year.

Volker Kauder, a close political ally of the German leader, added to tensions by publicly declaring Germany to be in the EU driving seat and warning Britain could not block such a tax.But the European Commission has admitted the levy would cost 500,000 jobs and Mr Cameron says the fallout would hit the City of London hardest and drive financial business out of Europe.He will repeat today that Britain would only back such a tax if it was applied globally to create a level playing field.

Germany and France are leading the drive for the tax and are prepared to go ahead with it just within the eurozone if necessary, raising fears of a “two-tier” European Union.On treaty change, Mrs Merkel insists a minor alteration could be done swiftly and she is likely to repeat her warning to Mr Cameron that he cannot use the occassion to grandstand over repatriating powers to the UK. – SKYNEWS