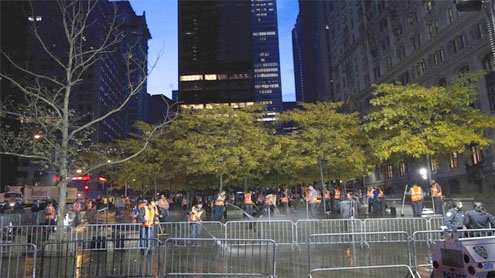 The movement began as a protest of major economic and political issues, but lately the most divisive issue has become the protests themselves. The Occupy Wall Street encampments that formed across the country to spotlight crimes committed on Wall Street have become rife with problems of their own.

There are sanitation hazards and drug overdoses, even occasional deaths and sexual assaults.On Tuesday, New York and other cities across the country continued the chaotic, disruptive process of picking sides. Police made arrests in at least six states; three civil rights groups filed lawsuits on behalf of protesters. Mayors and city officials from coast to coast held emergency meetings and tried to decide:Is the most far-reaching protest movement in the past decade solving problems or creating them?

Is this an occupation or an infestation?City officials have long complained about the disruptiveness of Occupy Wall Street, but in the past week, police officers began raiding encampments in the middle of the night, citing a public safety disaster. Only in Washington, it seems, do city officials and protesters continue to regard each other with cautious optimism.Meanwhile, in New York early Tuesday, the latest group of city police officers carrying shields and batons stormed a group of sleeping protesters, arresting 200 and erecting a barricade around Zuccotti Park, the birthplace of the movement.

“We are clearing this area,” a police officer announced.“This area is ours,” the protesters chanted back.Recent news updates from Occupy protests read like a crime blotter: A man shot near the encampment in Oakland. A homeless person dead in Salt Lake City. A suicide in Vermont. Two drug overdoses and a molotov cocktail in downtown Portland, Ore. A sexual assault in Philadelphia. Hypothermia in Denver, police brutality in California and a 53-year-old man unnoticed in his tent in New Orleans, dead for at least two days.Even more prevalent are city concerns about sanitation. Thousands of protesters have lived outdoors with few toilets and no showers for the better part of two months.

Protesters in Chicago violated a noise ordinance; a protester in New York defecated on a police car. In Oakland, when police officers forcibly cleared protesters from Frank Ogawa Plaza this week, in part to deal with a rat infestation, cleaning crews hauled away more than 100 tents, dozens of molded mattresses and 27.8 tons of trash.Democracy has rarely looked so messy.In the wake of so much controversy, the Occupy movement — which began as a populist uprising to represent all but the wealthiest 1 percent — has begun to lose some of its mainstream support. A Washington Post poll early this month showed that only 18 percent of responders “strongly supported” the Occupy Wall Street movement. On Monday, a few hundred New York residents and business owners organized a protest of the protests, wearing white masks and chanting: “Leave here now.”

City officials have said that the demonstrations have cost them millions of dollars — even as the protesters call for fiscal responsibility. Denver estimates its bill at $200,000 per week. Oakland has spent more than $1 million just to pay overtime for police officers. Businesses near Zuccotti Park say protesters have cost them a combined $500,000 in profits.The protest movement has “hurt the quality of life in every part of the city,” said Oakland Mayor Jean Quan.“In the past few days, the balance has tipped,” said Portland Mayor Sam Adams.

“We’re at a critical point where we must reevaluate,” said Philadelphia Mayor Michael Nutter.Mayors across the country have held group conference calls to talk about possible solutions, and many said they feel boxed into a corner. After two months, many Occupy encampments operate like miniature societies, with their own chefs, libraries, medical facilities and daily newspapers. The group has no stated demands; it has resolved to continue protesting through the winter. That puts the onus on the cities: Adapt to the protests as an ongoing reality? Or do something to end them?

New York chose the latter early Tuesday, when it shut down roads, bridges and subway systems near Zuccotti Park, a concrete square near Wall Street. Hundreds of police officers arrived in the middle of the night, their sirens and bullhorns waking protesters. It took four hours and more than 200 arrests for police to clear the park.For much of the day, confusion over whether the park would remain closed led to frustration for police officers and protesters.

About 50 police officers stood inside a barricade at the park as protesters ringed the outside and banged drumsticks against the fence. One young woman carried a sign that read: “I’m from TX and need to get home. They took all my stuff.” Another, 18-year-old Ian Schipman, said he had watched police throw his belongings into a garbage truck. – WP

“If you push us down,” he said, “more people will come.”Later in the day, a judge said the protesters did not have the right to take up residence again with their tents. Still, a crowd hovered around the park, and, as night fell, a roar went up when police allowed the protesters back in — without their tents and sleeping bags.One man walked through the park carrying a sign that read, “Grand Reopening Under New Management.”Lynch reported from New York. Staff writers Annie Gowen and Tim Craig and research editor Alice Crites contributed to this report. – WP