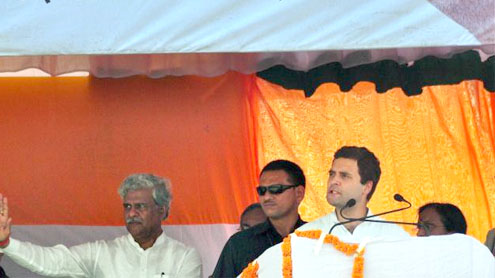 NEW DELHI: Rahul Gandhi’s speech at Phulpur, with a no-holds-barred, named attack on Mulayam Singh Yadav and Mayawati and strong positioning of himself as an agent of development, marks an irreversible change in the reticent prince who Congressmen say would be prime minister.

The speech, dismissing the formidable dalit and backward icons as having no concern for the poor because of their lust for power, surprised Congress leaders used to measured words from their heir apparent. They were equally shocked at his comparison of migrant labour with “begging”.The jury is out if Rahul’s anger on the Ganga banks will rub on to UP voters when they visit the polling booths in April-May 2012. But leaders were unanimous that the rally had enthused workers like never before in two decades.

Union minister of state Jitin Prasada said, “The speech spelt out the issues clearly and set the tone for aggressive campaigning against the misrule of Mayawati and Mulayam Singh Yadav.”Since he took charge of Congress’s campaign in UP in 2008, Rahul led novel attempts to strengthen the party with visits to Bundelkhand and dalit households. These marked attempts to reintroduce the party in a caste-polarised state through the use of cross-society plank of “pro-poor”. But the common complaint remained that his tone was too non-combative to match the shrill tone of rivals.

Possibly forced by the estimate that the party’s organisational muscle had not strengthened enough to tap into resentment against the government, the Congress general secretary hit the tone and words loud enough for a marginal player to be heard in the neatly polarised, identity politics.The new-found boldness was evident when Rahul repeated the post-Bhatta Parsaul allegations of atrocities on women despite the criticism earlier. As it was in his use of brutally raw words — even if someone’s daughter is raped, the FIR would be lodged only for a bribe — to convey the seriousness of corruption.

It is in variance with in-house sceptics who wonder if the use of “begging” for migrant labour would trigger adverse reaction among voters or the attack on Mulayam slam the doors on a post-poll ally. BJP and SP have already picked on his words to make it an issue of insult to dalits and backwards who form the bulk of migrant labourers.The post-rally mood in Congress is focused on the “new Rahul”. He is seen to have understood the standard pitch and tone of cowbelt politics.

The exaggerated use of corruption plank and even-handed treatment of SP and BSP chiefs is seen to have filled an essential strategic gap which tripped Congress in 2007. The anti-Mulayam bonhomie between Congress and Mayawati saw voters plump for the dominant force in BSP and Rahul’s extensive campaign came to naught.In what appeared a lesson learnt, Rahul slammed Mulayam upfront to quell any doubts about Congress playing footsie with SP. “It is a strategic victory in setting clarity on the direction of the campaign,” a leader said.Post-Phulpur, leaders said the tone was set for an aggressive campaign in the coming four months for voters’ attention. “Results apart, the basics are right,” a leader said. – TOI