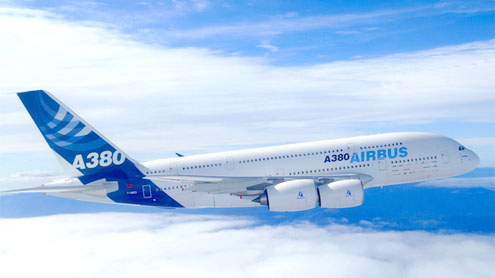 DUBAI: Qatar Airways on Tuesday at last signed an agreement for buying 55 Airbus planes, after a few hours of impasse with the plane-maker at the Dubai Airshow.

The Doha-based airline’s chief executive officer, Akbar Al Baker, announced the firm order for five A380 superjumbos and 50 A320neo jets, plus options. The order was placed hours after announcing an “impasse” in negotiations.Qatar’s national airline has selected the A320neo as the reference aircraft for expanding its short to medium haul fleet and has increased its order for the A380.Airbus chief operating officer John Leahy said the package before options is worth $6.4 billion at list prices.
“U

nfortunately Akbar doesn’t pay catalogue price,” Leahy joked after the deal was signed.He said the agreement, which includes options for Qatar Airways to buy another 30 A320neo planes and three more A380s, is “an important, if not the most important” Airbus deal at the airshow.“Under the guidance of Akbar, who’s demonstrated unwavering professionalism and leadership… we are delighted that Qatar Airways are placing their faith in Airbus and our products once again,” Leahy said before signing the deal.

Al Baker said the airline was able to come to an agreement with Airbus after an earlier conflict over two “sensitive” issues relating to the specification of the A320neo. He to comment further on the matter but said price “was not at all an issue.” It was impasse of few hours, so its not a big deal, he added.Earlier, he had said that any further delays to the Airbus A350, for which Qatar Airways is the launch customer, would be problematic.“The A320neo promises to be a great aircraft which is why we have chosen it to form the backbone of our future single aisle expansion. Together with our increase in A380s and our orders for A350 XWB, we are continuing investing in an integrated Family of the world’s most modern and fuel efficient aircraft,” Al Baker said.

As part of the deal, Qatar Airways will be first in line worldwide for each of the three models in the A320neo series, he said. Qatar Airways has ordered a total of 43 A320 family aircraft directly from Airbus and, including leased aircraft has 38 in its fleet.The last four of the A320s on order will be provisioned for “Sharklets” following a recently signed agreement.Qatar Airways’ total A380 order increases to 10 aircraft following its initial order for two made in 2003, which was later raised to five in 2007. Qatar Airways’ current in-service fleet also includes the region’s largest number of A330s (29).

“Qatar Airways supported the development of the Airbus A320neo very early on. It is with great pride that we are announcing this large order today [Tuesday] including an additional five A380s,” said Leahy.“We appreciate having built a unique relationship with our friends at Qatar Airways over the years.”

European planmaker is competing with its US rival for orders from aggressively expanding Middle East carriers such as Emirates Airline, Etihad Airways, and Qatar Airways.Earlier this week, Boeing won the largest order in its history when Emirates booked 50 777-300ER wide-body aircraft in a deal worth about $18 billion on the first day of the airshow. The order may reach a value of $26 billion if the Dubai-based airline exercises its option to buy another 20 777s. – Khaleejnews