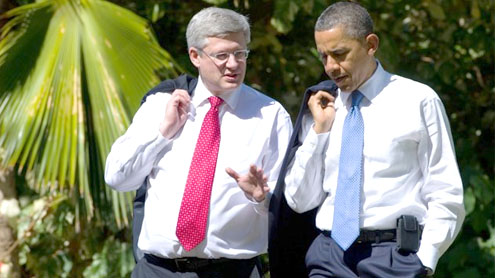 The effort was part of a broader executive order to cut $4 billion in waste to redirect the money to more pressing needs and make government more efficient.World leaders commonly exchange gifts as an act of goodwill and diplomacy. The White House said the gifts represented “a distinct part of the aloha spirit and helps forge new bridges of friendship and understanding.”The intricately designed orchid brooch was handcrafted in sterling silver by Hawaiian artist Wayne Keeth while the cufflinks were designed by Kara Ross, using wood from Hawaiian woodturner Keith Maile. The cufflinks are engraved with the words: “Made Exclusively for Michelle Obama.”

When you pop the question to your future wife, it never hurts to be from Hawaii.Michelle Obama said it certainly helped her husband’s cause when he asked her to marry him two decades ago.”That’s really one of the reasons I married Barack,” the first lady joked during a luncheon for spouses at the APEC forum. “When I realized that this is where we’d be spending the holidays, I said, ‘Yes — I love you!'”The Obamas typically spend the Christmas holidays in Oahu, the island where the president was born and spent most of his childhood.

“Our family has the privilege of coming here — the burden of coming back here every year,” Mrs. Obama said to laughter.Even amid the swaying palm trees and blue skies, Obama had plenty of reminders of politics back on the mainland.At the entrance of the J.W. Marriott Resort Hotel, where Obama addressed APEC leaders, four little girls each held up a piece of paper with letters spelling out the name “C-A-I-N,” a reference to Republican presidential contender Herman Cain.

During a gala dinner on Saturday night, meanwhile, Hawaiian guitarist Makana wore a homemade “Occupy with Aloha” T-shirt, a reference to the Occupy Wall Street movement.During his performance, Makana repeatedly sang a protest ballad called “We Are the Many,” which included lyrics such as “The lobbyists at Washington do gnaw … and until they are purged we won’t withdraw.” – Yahoonews