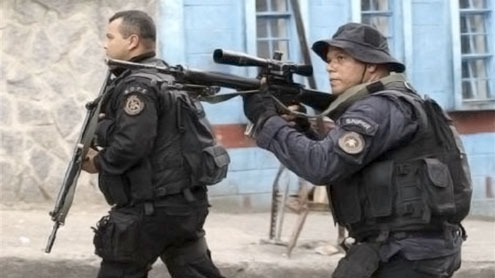 The occupation of Rocinha, a notorious hillside “favela” that overlooks some of Rio’s swankiest areas, is a crucial part of the city’s preparations to host soccer’s World Cup in 2014 and the Olympics two years later.Security forces have occupied nearly 20 slums in the past three years but none as symbolically or strategically important as Rocinha, a sprawl of shacks, stores and evangelical churches located at a traffic choke point between the main city and western areas where most Olympic events will be held.

With large army helicopters thudding overhead, soldiers and police began climbing the slum’s winding roads just after 4 a.m. and declared the operation a success within two hours after encountering no resistance.The invasion of Rocinha and the nearby Vidigal slum was as much a media event as a military operation, as dozens of reporters followed the authorities through deserted, garbage-strewn streets. The authorities had announced their plans days in advance, giving gang members plenty of notice to flee.According to TV news channel GloboNews, only one person was detained during the operation and there were no reports of casualties. Troops later hoisted the Brazilian flag over the community to symbolize its “return” to the state.

After years of living in fear of both gang members and the often-violent tactics of police, residents were wary of embracing the new reality.“Let’s hope for the best, but there’s a lot more that needs to be done,” said Sergio Pimentel, a funeral director sitting outside his business watching the operation unfold.He pointed to an alley that he said poured raw sewage on to the street whenever it rained.“We need basic sanitation, health, education. They have to come in with everything, not just the police.”Rio state Governor Sergio Cabral said he had called President Dilma Rousseff to inform her of the operation’s success, saying it was a “historic day” for the city.

“These are people who needed peace, to raise their children in peace,” he told reporters. “… They want access to a dignified life.”The sprawling hillside community, home to about 100,000 people, has one of Brazil’s worst rates of tuberculosis, officials say. It is often described as the largest slum in Latin America and is believed to be the main drug distribution point in Brazil’s second-largest city.Police captured the slum’s alleged top drug lord, a 35-year-old with a taste for expensive whiskey and Armani suits, in the trunk of a car on Thursday as they tightened their grip around Rocinha.On Sunday, a group of cops relaxed for a moment in the house of another captured drug boss and admired a huge fish tank, a rooftop swimming pool and a Jacuzzi in the bedroom.

Among the articles hastily left behind by the gang member, known as “Peixe” or “Fish”, were chunks of meat ready for the barbecue and the book “The Art of War,” by Sun Tzu.Under a so-called “pacification” program, Rio authorities are following up invasions by handing slums over to specially trained community police and providing services such as health centers and formal electricity and TV supply. The aim is to foster social inclusion and give the city’s one million or more slum residents a bigger stake in Brazil’s robust economy.

Progress has sometimes been slow, however. A year after a similar operation to occupy a large slum called Alemao, the favela has yet to receive a community police force as the security forces struggle to train enough officers.Most of the occupations have taken place in slums close to Rio’s wealthier areas, leading to criticism that the program is aimed mostly at supporting the city’s real-estate boom and preparing for the sports events. Huge slums in more distant areas are still controlled by gangs or militia groups made up of rogue off-duty police and firefighters. – Khaleejnews