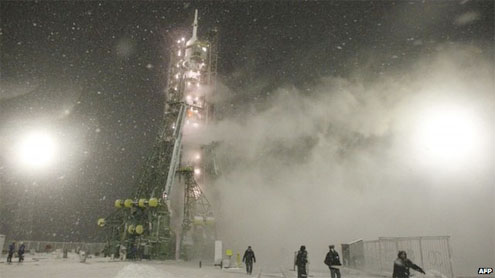 A Russian spacecraft carrying three astronauts – two Russians and one American – has launched successfully from Kazakhstan.

They are the first to travel on a Russian Soyuz craft since a similar unmanned rocket carrying cargo crashed shortly after launch in August.All manned space travel was suspended after that crash for almost three months.The astronauts are on their way to the International Space Station (ISS).The rocket lifted off from Russia’s Baikonur cosmodrome in Kazakhstan’s snow-covered steppes at 08.14 (04:14 GMT).

Once safely in orbit, the three astronauts gave a thumbs-up signal to cameras on board the craft and said: “Everything is normal and we are feeling fine”. Applause broke out at the mission control centre in a northern Moscow suburb.The BBC’s Daniel Sandford in Moscow says the Soyuz has historically been a relatively safe way of getting into space.But on 24 August, a similar Russian-built Soyuz rocket taking supplies to the space station crashed soon after launch.That led to the human space flight programme being suspended until now. But in their final comments to the media before the launch, the three men insisted they were confident in the technology and had no concerns.

“We don’t have any black thoughts. We have faith in our equipment,” Anton Shkaplerov, 39, was quoted by Russian media as saying.Mr Shkaplerov and fellow Russian Anatoly Ivanishin, 42, are making their first maiden space voyages. For veteran Nasa astronaut Dan Burbank, 50, it is his first voyage on board a Soyuz spacecraft.After a two-day journey aboard the Soyuz capsule, the crew will dock with the space station, overlapping briefly with the current crew – station commander Mike Fossum of Nasa, Japan’s Satoshi Furukawa and Russia’s Sergei Volkov – who will then return to earth.

The launch is the first since the American space agency Nasa ended its 30-year shuttle programme in July, heralding a gap of several years when the 16 nations investing in the $100bn International Space Station will rely solely on Russia to ferry crews.There had been fears that any problems with this launch could leave the ISS unmanned for the first time in more than a decade when the current crew leave on 21 November.

Mr Shkaplerov, Mr Ivanishin and Mr Burbank are due to remain at the space station until March.Moscow hopes a smooth mission to the ISS will begin to restore its reputation after more trouble last week when the $165m Phobos-Grunt probe destined for Mars’ moon got stuck in orbit round the Earth.Russia’s space agency chief said the August rocket failure was an “isolated” glitch caused by a fuel pipe blockage. – BBC