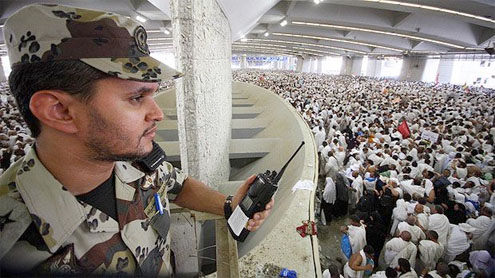 RIYADH: Custodian of the Two Holy Mosques King Abdullah thanked Crown Prince Naif, deputy premier and interior minister, and all others who worked for the success of the Haj this year, the Saudi Press Agency reported Friday.

In a reply cable sent to Prince Naif, the king said, “We will not spare any effort to make Haj simple for pilgrims who set out to the Holy Mosque seeking the blessing of Almighty Allah.”The king also said in his reply that the opportunity to serve pilgrims was a blessing from Allah.In a cable sent earlier Prince Naif, who is also the chairman of the Supreme Haj Committee, congratulated the king on the success of the Haj arrangements for 2011, which enabled nearly three million pilgrims to perform the standing at Arafat and other Haj rituals peacefully.

“I am honored to inform Your Majesty about the grand success of this year’s Haj season,” the prince said.“The services this year were excellent, thanks to the completion of several new projects aimed at increasing the ease and comfort pilgrims,” the crown prince said. – Arabnews