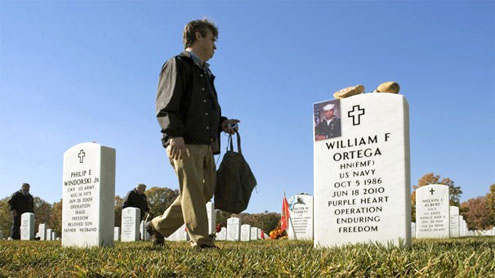 The headstones wear Hawaiian leis and Mardi Gras beads. They are festooned with bottles of Yuengling, flasks full of Jack, boxes of cigars.

In Arlington National Cemetery’s Section 60, where those killed in Iraq and Afghanistan lie, the graves aren’t just markers of remembrance; they are canvases decorated with stones, shiny balloons and handwritten notes. In this corner of the nation’s most sacrosanct military burial ground, all manner of ornamentation abounds — one headstone is covered in lipstick kisses — bringing a colorful poignancy to an otherwise monochromatic place of mourning.Above all there are faces.

One note reads, “Dear Daddy, I know it seems impossible but I’m going to be a junior in high school.”Many of these mementos are gathered by curators from the U.S. Army Center for Military History who descend on Section 60 every week. To preserve what is left behind, they add the items to a collection they hope will one day become a museum exhibit to help tell the story of the wars, and their cost.On Friday, Veterans Day, the cemetery will again be full of mourners who will leave in their wake new graveside gifts. And sometime next week, the curators will sweep through with their plastic bags.

Since the program began about two years ago, after news outlets reported that the cemetery was regularly trashing items left at graves and leaving others to rot in the rain, the curators have collected more than 4,500 objects. They are catalogued and stored at a climate-controlled facility at Fort Belvoir, where the air is recycled four times daily.

Flowers and other organic materials are not kept.“Items that are not collected by the Center for Military History are removed when they become faded and unsightly or pose a hazard to groundskeepers,” said cemetery spokeswoman Jennifer Lynch. (She would not say how the uncollected objects are disposed of.)

At the Vietnam Veterans Memorial, visitors have been leaving objects for many years, and they are collected daily by the National Park Service. Some have been displayed at the Smithsonian’s National Museum of American History. They also are kept at a Park Service facility in Landover.At Arlington, before the wars in Iraq and Afghanistan,“the expression of grief was confined to wreaths and flowers — that’s all people brought by,” said Chris Semancik, acting chief of the Army’s Collections Branch. “It’s now changed to be much more personal in nature.”