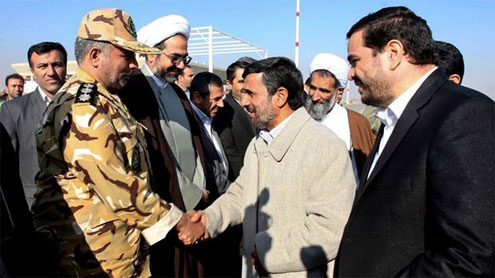 Israel called on the world to stop Iran’s nuclear program in response to the UN International Atomic Energy Agency’s report. The Israeli statement did not refer to the option of a military attack despite recent signals that would be a possibility.In his first reaction to the report, Ahmadinejad strongly criticized the agency — a day after it claimed Tehran was on the brink of developing a nuclear weapon — saying the IAEA is discrediting itself by siding with “absurd” US accusations.The comments, broadcast live on state TV, were a sharp rebuke to Western warnings that Iran appears to be engaged in a dangerous defiance of international demands to control the Islamic Republic’s nuclear ambitions.

Israeli Prime Minister Benjamin Netanyahu’s office said the IAEA report confirmed long-standing claims by Israel and Western countries that Iran is developing nuclear bombs.“The significance of the report is that the international community must bring about the cessation of Iran’s pursuit of nuclear weapons, which endanger the peace of the world and of the Middle East,” the statement said. Israel sees Iran as an existential threat, citing the nuclear program, Ahmadinejad’s calls for Israel’s destruction and Iran’s support for Arab militant groups.Israeli officials are hopeful the international community will pass tough new sanctions that cripple Iran’s key energy sector or target its central bank, which would hinder its ability to conduct international trade.

In an interview with Israel Radio on Tuesday, ahead of the report’s release, Defense Minister Ehud Barak said that without effective sanctions, Israel would not take any option “off the table,” a reference to possible military action.In Paris, Foreign Minister Alain Juppe said France would support boosting sanctions against Tehran to an “unprecedented scale” if Iran stonewalls investigations, even as Israel and others say that military options are still possible.“We cannot accept this situation (of a nuclear-armed Iran), which would be a threat to stability and peace of the region and beyond,” he said on France’s RFI radio.

But Russia, which has veto-wielding power on the UN Security Council, said dialogue with Iran is the only way forward and new sanctions would be unacceptable.“Any additional sanctions against Iran would be perceived by the international community as an instrument for regime change in Tehran,” deputy Foreign Minister Gennady Gatilov told the Interfax news agency, adding that Russia “does not intend to consider such proposals.”The Russian Foreign Ministry called the report a “biased” compilation of well-known facts intended to “juggle” public opinion, comparing it to US assertions that ousted Iraqi leader Saddam Hussein was developing weapons of mass destruction that later proved false.

A top Russian diplomat also warned Wednesday against a military operation that has not been approved by the UN.Sergei Ryabkov told the Itar Tass news agency that “illegitimate use of force will have unpredictable and dire consequences” for Middle East and global security.The UN Security Council has passed four sets of damaging sanctions on Iran, but Russia and China oppose further measures and are unlikely to change their minds despite the report’s findings.

China, also a veto-wielding member, has not publicly commented yet on a UN assessment of Iran’s nuclear programs in a likely sign that it will wait for Washington and Moscow to signal their intentions. Chinese Foreign Ministry spokesman Hong Lei said Wednesday that Beijing was studying the report and repeated calls for dialogue and cooperation.The 13-page annex to the IAEA’s report released Tuesday included claims that while some of Iran’s activities have civilian as well as military applications, others are “specific to nuclear weapons.”

Among these were indications that Iran has conducted high explosives testing and detonator development to set off a nuclear charge, as well as computer modeling of a core of a nuclear warhead. The report also cited preparatory work for a nuclear weapons test, and development of a nuclear payload for Iran’s Shahab 3 intermediate-range missile — a weapon that can reach Israel.Ahmadinejad was defiant in an address to thousands of people in Shahr-e-Kord in central Iran.“This nation won’t retreat one iota from the path it is going,” he said. “Why are you ruining the prestige of the (UN nuclear) agency for absurd US claims?“

Ahmadinejad also repeated Iran’s claims that it doesn’t make sense to build nuclear weapons in a world already awash with atomic arms.“The Iranian nation is wise. It won’t build two bombs against 20,000 (nuclear) bombs you have,” he said in comments apparently directed at the West and others. “But it builds something you can’t respond to: Ethics, decency, monotheism and justice.”A conservative Iranian lawmaker later threatened that the parliament could force the government to pull out of the Nuclear Non-Proliferation Treaty, or NPT, as a response to the report by IAEA chief Yukiya Amano.

“In the first stage, we will pull out of NPT if Amano shows incompetence and asks for Obama’s permission for every report,” conservative lawmaker Mahmoud Ahmadi Bighash told state TV Wednesday.The US and allies claim a nuclear-armed Iran could touch off a nuclear arms race among rival states, including Saudi Arabia, and directly threaten Israel. The West is seeking to use the report as leverage to possible tougher sanctions on Iran, but Israel and others have said military options have not been ruled out.

The bulk of the information in the IAEA report was a compilation of alleged findings that have already been partially revealed by the agency. But some of the information was new — including evidence of a large metal chamber at a military site for nuclear-related explosives testing. Iran has dismissed that, saying they were merely metal toilet stalls.Iran’s official IRNA news agency also quoted Bighash as saying the report shows that IAEA “has no powers and moves in the direction” of the US and allies. Another parliament member, Parviz Sorouri, accused Amano of tarnishing the agency.“The report was drawn up by Americans and read by Amano,” the semiofficial ISNA news agency quoted him as saying. – Arabnews