Sarkozy overheard to Obama: Netanyahu is a liar 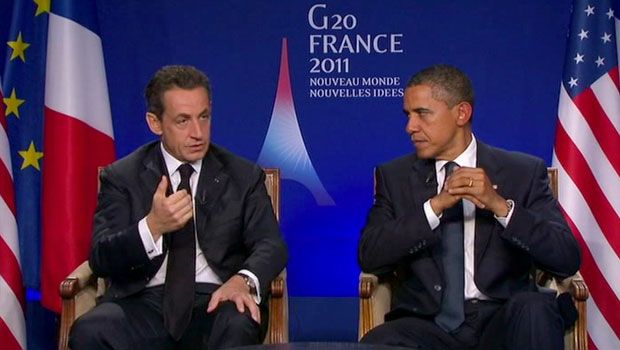 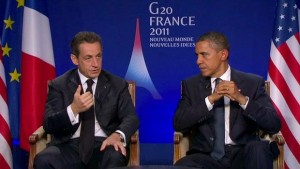 Obama, heard through an interpreter, responded, “I have to work with him every day.”Some Israelis felt French President Nicolas Sarkozy uttered out loud what many think in private about Israeli Prime Minister Benjamin Netanyahu. Others were shocked, and embarrassed.Fragments of a conversation between Sarkozy and Obama were overheard by reporters last week at the Group of 20 summit in southern France, via headsets that were to be used for simultaneous translation of an upcoming news conference.Sarkozy’s remarks were especially harsh for a man who has labored to improve French relations with Israel while also using France’s traditional ties to Arab countries to encourage peace talks — and whose maternal grandfather was Jewish.It’s an awkward moment for Obama, who was already seen as cool to Netanyahu but is Israel’s main international ally.Several French-speaking journalists, including one from The Associated Press, overheard the conversation but did not initially report it because Sarkozy’s office had asked the journalists not to turn on the headsets until the news conference began. The comments were deemed private under French media traditions.

French journalists rarely report on public figures’ private lives, for example, and when they report behind-the-scenes conversations involving top politicians, they almost never cite the source of the information.However, a French website that analyzes media coverage of current affairs, Arret sur images, on Tuesday reported fragments of the Sarkozy-Obama conversation.Sarkozy’s office would not comment Tuesday on the remarks, or on France’s relations with Israel. The White House and Netanyahu’s spokesman also said they had no comment.In the remarks Thursday in Cannes, Sarkozy said: “Netanyahu, I can’t stand him. He’s a liar.”Obama, whose remarks were heard via a French translation, was not heard objecting to Sarkozy’s characterization of Netanyahu. According to the French interpreter, Obama responded, “You are sick of him, but I have to work with him every day.”

Through the interpreter, Obama was heard asking Sarkozy to help persuade the Palestinians to stop their efforts to gain UN recognition of a Palestinian state.The journalists heard only fragments of the leaders’ conversation.Eytan Gilboa, an expert on US-Israel relations at Bar-Ilan University near Tel Aviv, said the overheard comments could do Israel harm.“Israel has a problem with a lack of credibility,” said Gilboa. “Israel needs the US, especially now when it has Iran.”He said Obama’s comments cast doubt on the belief that Israel and the US have mended ties in recent months. “When you see things like this, you understand … things have not been repaired.”After a meeting in the Oval Office in May, Netanyahu lectured the US president on his view of Middle East realities even as cameras rolled, with Obama listening glumly by his side. Obama and Netanyahu have little personal chemistry at meetings, and Netanyahu has cultivated close ties to the Republican Party and is widely believed to consider Obama naive about the Middle East.

Sarkozy, since becoming president in 2007, has strengthened French ties with Israel after a cool period under his predecessor Jacques Chirac, but his latest comments may complicate French efforts toward Mideast peace.France’s government has not said so officially but appears to see Netanyahu as partially responsible for the deadlock in peace talks. France has repeatedly urged Netanyahu to stop building Jewish settlements in the West Bank and come to the negotiating table, to little avail.
“In our relationship with Israel, as with our relationship with the Palestinians, what we want is to continue to work so that things move ahead — because they’re not moving ahead,” French Foreign Ministry spokesman Bernard Valero told reporters Tuesday.The overheard remarks by Sarkozy and Obama were prominently covered in Israel, where Sarkozy is widely perceived as a friend, in striking contrast to some of his predecessors.Israel has had a fraught relationship with France. The country was an early supporter of the Jewish state, selling it arms and planes and helping it develop a nuclear reactor. But the relationship soured under Charles de Gaulle, perceived as having abandoned Israel before the 1967 war.“There has been improvement of the relationship since Sarkozy took over,” Avi Pazner, who was Israel’s ambassador to France in the 1990s, said Tuesday.

In comments at the G-20 last week, Sarkozy said that if Israel’s existence is threatened, “France will not stand by with arms crossed.”Netanyahu, meanwhile, is a controversial figure even at home, regularly pilloried by the center-left opposition for preferring settlement construction in the West Bank to peace talks with a relatively moderate Palestinian leadership.“Obama is wrong,” wrote one reader on the Israeli newspaper Haaretz’s web site. “We’re the ones that have to deal with him every day.”In Jerusalem, retired driver Yair Peleg said Obama and Sarkozy made an accurate call about Netanyahu. Peleg, 66, said he voted for Netanyahu’s Likud party in the past but won’t anymore because of Netanyahu’s free-market economic policies, which many here believe has fueled a growing gap between rich and poor.“Not only is he a liar, but a big liar,” Peleg said. “He speaks with his hands, it’s all about me, me me, and meanwhile he doesn’t do anything.”

Shabi Nissim chuckled as he heard the details of the slip. Nissim manages a yogurt and juice bar. “I am embarrassed for Netanyahu,” he said. “It’s humiliating.”Remarks overheard by journalists have embarrassed world leaders in the past. At a Group of Eight summit in 2006, an open microphone caught then-British Prime Minister Tony Blair appearing subservient to President George W. Bush, who greeted him by shouting, “Yo, Blair!“ – arabnews