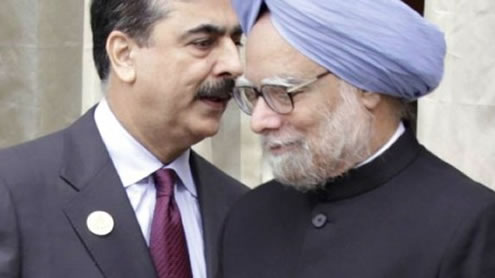 NEW DELHI – In a surprise move, Indian Prime Minister Manmohan Singh has asked the Indian Ministry of External Affairs to send a request to his Pakistani counterpart Yousaf Raza Gilani for a meeting in Maldives on the sidelines of the eight-member SAARC summit on November 9 to 10.
Officials at the ministry had tried to persuade Singh to wait instead for an invitation from Pakistan as they believed that a request should have come from Islamabad as it needed India’s help more after its strained relations with both the US and Afghanistan. The Indian Prime Minister’s Office has directed the foreign secretary to send the request as Singh wanted to personally thank Gilani on two counts – the immediate release of an army helicopter with four soldiers that had “mistakenly” crossed the Line of Control and Pakistan granting India the Most Favoured Nation status.

India had granted this status to Pakistan way back in 1996. In March, Singh kept the ministry out of the loop when he directly faxed an invitation to Gilani to watch the India-Pakistan cricket World Cup match in Mohali. According to insiders, Singh finds ministry officials always prejudiced against Pakistan and hence prefers to take decisions on Pakistan without consulting them. It is also believed that Singh is in a hurry to normalise relations with Pakistan to enable him to visit Islamabad next year between July and September to take crucial decisions on the issues of Siachen, Sir Creek and make substantive progress on Kashmir. – Pakistantoday