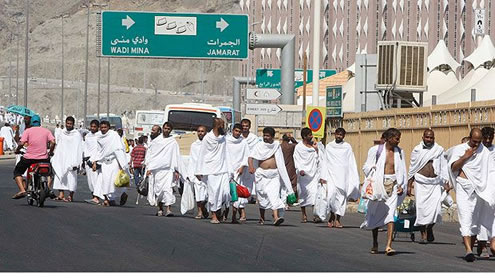 MINA: The valley of Mina came alive as more than 2.5 million pilgrims from around the world converged on the tent city on their first stop to the plains of Arafat.

There was adequate security. Officers were out in full force to help the pilgrims and ensure their smooth movement.The day is known as Yaum Al-Tarwiyah (Watering Day), as pilgrims traditionally watered their animals and stocked water for their trip to Arafat, some 10 kilometers further on.Many pilgrims took buses, while others set off on foot for a valley that comes to life for just five days a year.Around 1.8 million believers descended on Mina from around the world who will be joined by over 700,000 pilgrims from inside the Kingdom.Haj is one of the five pillars of Islam and must be performed once in a lifetime by every able-bodied Muslim who can afford the expenses of the journey.On reaching Mina, the first task of the pilgrims was to locate their tents. Once in their fireproof tents, they busied themselves in reciting the awe-inspiring talbiyah, “Labbaik Allahumma Labbaik” (O God, here I am answering Your call).

The thrill on their faces was self-explanatory.“We reached Mina early in the morning,” said Abdul Raoof Contractor. “It was not much of a task…the traffic from Makkah into Mina was smooth.”Accompanied by his son Aleem, the aged pilgrim said he wanted to walk all the way from Makkah to Mina. “But my son dissuaded me from doing that; he felt I should conserve my energies for challenging rituals ahead.”For Muhammad Taj and his wife Fatima from Khartoum, Sudan, the first leg went as per plan. “Stage one has gone very well for us,” they said. “We started after Fajr from Makkah and were here in our camp by 8 a.m.,” said Taj.According to Taj, finding their location in Mina was not difficult. “Since we speak Arabic and since we had come here three days before to familiarize ourselves, it was quite easy. We knew where we would be located beforehand.”Journalist Masoom Moradabadi, who is performing Haj as a guest of Custodian of the Two Holy Mosques, called it a unique gathering of Muslims.“The Saudi government deserves all praise for the excellent arrangements. They have left no stone unturned in the services of the guests of Allah,” he told Arab News. “We are delighted to be part of this greatest annual gathering of Muslims.”

The most inspiring sight for Moradabadi was the group of pilgrims moving together and reciting talbiyah in unison. “It touches the heart and brings tears to the eye,” he said. “It is very moving.”Some pilgrims said their movement to Mina did not go through as planned.Asfar Ahmad, an Indian, admitted that the delays were expected. “Such things do happen in this mass movement of people,” he said.“We had a difficult time circumambulating the Holy Kaaba…There were too many people. We had to do it on the Grand Mosque’s first floor.”Though Asfar looked tired after a long journey, his spirits were high. “I told my wife who came from Pakistan that Haj entails immense hardships. So she was mentally prepared for the onerous task. Now we are under the protection of Allah,” he remarked.Adnan S. Rehaily, a Saudi father of three, said reaching Mina was not difficult but reaching Makkah from Riyadh was a difficult task.

“There were hundreds of checkpoints on the Riyadh-Makkah Highway and everywhere we were asked to provide the tasreeh (Haj permit). On the way we saw many people were in ihram but they did not have the permits so they were turned back. In many cases the pilgrims would get off their GMCs and walked around the checkpoint on foot from the other side and got onto their vehicles after the driver had got past the checkpoint. We saw this happening at many places,” said Rehaily.“I don’t know what to say but there were many women who were accompanying the pilgrims and it was sad to see women walking through the difficult terrain near Taif.”Adeeb Ahmed, a member of the Indian Haj delegation and a parliamentarian, congratulated Saudi Arabia for making exceptional arrangements of Haj. “They have done a remarkable job,” he said.

Ahmed said Mina has undergone a complete change.“This is not the Mina I visited 10 years ago. It is now the most modern city with most modern facilities.”
He, however, complained about haphazard arrangement in the Indian pilgrim camps. “Many Indian Hajis came complaining to us about lack of facilities.”On Saturday the pilgrims will move to Arafat plains to spend the day in prayers and meditation — the most important ritual without which the pilgrimage will be invalid. The pilgrims will leave Arafat after sundown and stay overnight at Muzdalifah. They will move back to Mina after dawn on Sunday for the stoning of satan, a ritual that lasts three to four days, and for sacrificing animals. – Arabnews