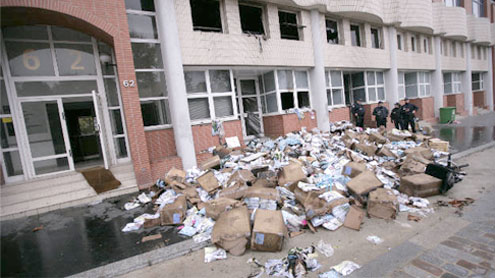 Paris: The offices of the French satirical magazine Charlie Hebdo burned early Wednesday morning, the day it was due to publish an issue with a cover appearing to make fun of Islamic law.The cover has a bearded and turbaned cartoon figure of the Prophet Mohammed saying “100 lashes if you’re not dying of laughter.”

The magazine’s publication director said the fire was caused by a Molotov cocktail.The executive, identified on CNN affiliate BFM-TV as “Charb,” expressed outrage at the attack.”The arsonist didn’t read this magazine — no one knows what’s in this magazine except for the ones who will buy it this morning,” he said.”People acted violently over a magazine where they don’t even know the content. This is what is most deviant and dumb,” Charb said.French Interior Minister Claude Gueant expressed the support of the nation for the magazine.”The freedom of the press is a sacred freedom for French people. Everything will be done to find the perpetrators of this attack,” he said.

Bertrand Delanoe, the mayor of Paris, “strongly condemned this act of violence.””We may not agree with this week’s edition of Charlie Hebdo, but we are in a society that needs freedom of expression, and any violence that undermines this freedom… is absolutely unacceptable,” he said on BFM-TV.He offered to help Charlie Hebdo find other offices “in order to support the newspaper and its freedom.Paris police confirmed that a fire started at the Charlie Hebdo building at 1 a.m. Wednesday and was extinguished about two hours later.They could not confirm that the fire was started by Molotov cocktails.

An investigation is underway, they said.France has been wracked by tensions over its rapidly growing Muslim minority.The country banned the wearing of Islamic veils and other face coverings earlier this year, claiming they were both degrading and a security risk. Belgium has passed similar legislation, and Switzerland banned the building of minarets, the tall spires which often stand next to mosques.Muslims around the world have demonstrated over cartoons of the Prophet Mohammed, and some of the cartoonists have been attacked or threatened. Islam generally bans depictions of its founder.

The French magazine received threats after it announced an edition guest-edited by the Prophet Mohammed and dedicated to the Arab Spring, Charb told BFM.”I don’t think Islam is a taboo subject, I think we have the right to talk about anything,” he said.The issue is renamed “Charia Hebdo,” a reference to Islamic law, or sharia.The website of the magazine has also been hacked by “Cyber-Warrior TIM” claiming to be from Akincilar, “for Islam.”The redirect page says, “You keep abusing Islam’s almighty Prophet with disgusting and disgraceful cartoons using excuses of freedom of speech.” It has messages in both English and Turkish.The hacking group does not claim to be responsible for the physical attacks on the building in its statement. – CNN