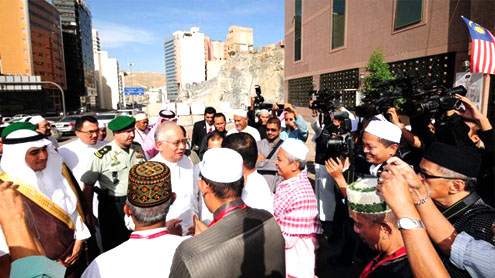 JEDDAH: Many of the 2.5 million pilgrims, who are expected to perform Haj this year, will leave for the Mina valley, located five km east of Makkah, on Thursday evening at the start of the annual pilgrimage. The rest of them will proceed to the tent city Friday.

Saudi Arabia has completed all preparations for the largest Muslim gathering by mobilizing all its resources to ensure the welfare and security of pilgrims. Crown Prince Naif, deputy premier and minister of interior, inspected the Haj arrangements on Tuesday.More than 1.8 million pilgrims have so far arrived from different parts of the Islamic world to take part in the Haj, the fifth pillar of Islam, which every Muslim who is financially and physically fit must perform once in life. They will be joined by more than 500,000 pilgrims from the Kingdom including expatriates.

The majority of the faithful who are performing Haj for the first time are immensely happy for having gotten the rare opportunity. They repeat the religious slogan: “Labbaik Allahumma Labbaik” (O God, we are here in response to your call).“I have got an opportunity to come for Haj after waiting several years, during that period I have dreamed many times about performing Haj and touching the Holy Kaaba,” said Jan Khan Qayoom, a Pakistani, while praising the Saudi government for making excellent arrangements for the pilgrimage.

Jamariya Rahman of Indonesia said she was extremely happy when she saw the Holy Kaaba for the first time. “I could not control my tears of joy,” she said and thanked God for realizing her dream to pray in the Grand Mosque of Makkah. She commended Custodian of the Two Holy Mosques King Abdullah’s services to Islam and Muslims. “We all love him and pray for his long life.”

Sudanese Qassim Munawar was all praise for the massive arrangements the Saudi government has made for the annual event, saying it has made pilgrims happy and helped them concentrate on worship and meditation in peace and tranquility.This year the pilgrims will enjoy full-scale operation of the Mashair Railway that links the holy sites of Mina, Arafat and Muzdalifah. The train service will bring about a dramatic improvement in the transport of pilgrims by carrying more than 1 million faithful during the peak Haj days.

The continuous transport system will carry Iranian and non-Arab African pilgrims this year on nearly 3,000 buses.As a result of a massive media campaign launched by the government, the number of pilgrims who sneak into the holy sites without Haj permits and squat in public places would be less than previous years. Security officers have turned back more than 50,000 illegal pilgrims during this Haj season. Illegal pilgrims have been a big bother for Saudi Haj managers.

Different government departments are providing various services to pilgrims. The Commerce Ministry said it would send 180 huge cold-storage trucks to the holy sites to ensure adequate supply of foodstuffs, including beverages, fruit juices and dairy products. It has deployed special squads to monitor prices of essential commodities in Makkah and the holy sites.Saudi banks through their 367 branches in Makkah and 75 Madinah meet the monetary requirements of pilgrims. These banks have a total of 11,517 ATMs in different parts of the country. Many banks will be operating during the Haj season to serve pilgrims.

The Ministry of Islamic Affairs has set up a website named www.al-Islam.org, which attracted more than a million visitors within three weeks. The website contains a number of articles on Haj and answers questions that come in the minds of pilgrims.Charitable organizations play an important role in helping many pilgrims perform Haj free of charge and distributing free meals. The Saleh Al-Rajhi Endowments said it would distribute more than 500,000 packets of meals among pilgrims in Makkah and the holy sites.The charity is also hosting 1,500 domestic pilgrims and 300 Indonesian pilgrims. – Arabnews