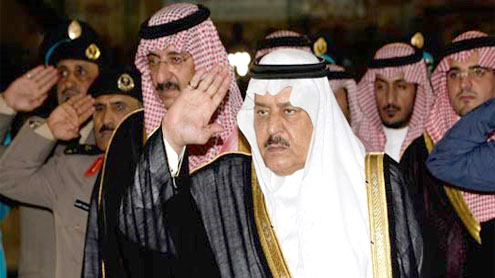 Saudi Arabia:  Saudi Crown Prince Nayef bin Abdul Aziz on Tuesday ruled out any compromise with Iran over allegations of Iranian involvement in a plot to murder the Saudi ambassador to Washington.

“There can be no compromise with Iran concerning the assassination bid because there is no need for it,” the crown prince, who also holds the interior ministry portfolio, told a news conference in Mecca.“We are ready to deal with any scenario… with any means necessary,” he added without further details during an inspection tour of preparations for the annual hajj Muslim pilgrimage to Mecca, Islams’ holiest site.Iran has fiercely and repeatedly denied any involvement in the alleged plot, which the United States said implicated an Iranian-American car salesman in custody and Iranian officials in a plan to hire a Mexican drug cartel to kill the Saudi ambassador to Washington.

Qatar’s Prime Minister Sheikh Hamad bin Jassem Al-Thani proposed on Sunday that Saudi and Iranian officials should meet over the alleged plot, the official Qatari news agency QNA reported.“I think that the best and easiest way to solve this issue is for the two sides to meet,” Sheikh Hamad said after talks with Iranian Foreign Minister Ali Akbar Salehi in Doha.“The Islamic Republic of Iran and Saudi Arabia are two big nations and should have good relations,” he said, adding that he hoped the US allegations against Iran would be proven false.“We are part of the Gulf Cooperation Council, and we have an interest in the security and stability of Saudi Arabia. We hope that it is false,” he said.

“We still wait for evidence,” said Sheikh Hamad.In an Saudi newspaper interview last week, Salehi again denied that his country plotted to kill the Saudi ambassador to Washington, Adel al-Jubeir.“We reject these accusation. There is no justification for Iran, which is a brotherly country to Saudi Arabia, to do such an act,” he told Asharq al-Awsat newspaper.“It’s an American accusation — they want to create divisions between Muslim countries and especially the two most important countries in the Islamic world, Saudi Arabia and Iran,” Salehi said.

On Tuesday Salehi said Washington recently made a written offer to speak with Iran over the alleged plot, implying that Tehran rejected it.The United States claims that the Quds Force of Iran’s elite Revolutionary Guards plotted to kill the Saudi ambassador to Washington by hiring assassins from a Mexican drug cartel for $1.5 million.An Iranian-American accused of involvement in the plot pleaded not guilty in a New York court last week. – Khaleejnews