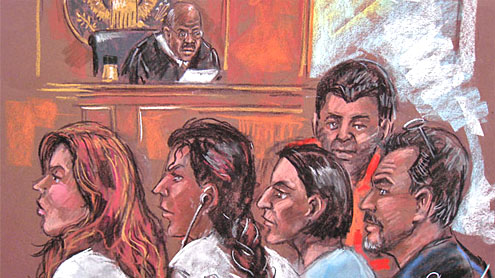 The 10 sleeper agents exposed in 2010 were reportedly succeeding in efforts to rise in American society and gain connections to policymakers. Newly released documents detail the investigation.

Reporting from Washington—Brush passes. Dead drops. Secret electronic messages. All under the watchful eye of the FBI.Documents released Monday, including photos, videos and papers, offered new details about the FBI’s decade-long investigation into a ring of Russian sleeper agents who, U.S. officials say, were trying to burrow their way into American society to learn secrets from people in power.

The investigation was code-named Operation Ghost Stories because six of the 10 agents had assumed the identities of dead people.The agents, whom the U.S. sent to Russia in July 2010 in the largest spy swap since the Cold War, are not accused of stealing any U.S. secrets. But they were more dangerous than commonly believed, C. Frank Figliuzzi, FBI assistant director for counterintelligence, said in an interview.

They were “the cream of the crop” of trained Russian intelligence agents, he said, and they were sent here to blend in and befriend American policymakers. They were succeeding, Figliuzzi said.”Several were getting close to high-ranking officials,” he said. One had gone to work for a confidant of a U.S. Cabinet member, he added, declining to offer details.One of the Russians, who identified herself as Cynthia Murphy of Montclair, N.J., provided financial planning for Alan Patricof, a New York venture capitalist and top Democratic donor who was finance chairman of Hillary Rodham Clinton’s 2008 presidential campaign, according to news reports.

The agents were known as “illegals,” because they weren’t operating out of Russian embassies or military missions. Instead, they led seemingly normal lives in the U.S.Figliuzzi noted that one of the spies, Donald Heathfield of Cambridge, Mass., attended Harvard University’s John F. Kennedy School of Government, which trains many senior government officials. One of the photos released Monday showed Heathfield, who purportedly stole the identity of a Canadian infant who had died decades ago, graduating from Harvard in 2000. The university has revoked the degree.One of Murphy’s neighbors remarked: “How could she be a spy? Look at her hydrangeas,” Figliuzzi said.

The FBI released the documents, many of them heavily redacted, in response to a Freedom of Information Act request from the Associated Press.After watching the Russian network for a decade, the FBI decided to wrap it up last year. “We had seen enough of the reporting going back to Moscow Center to trouble us,” including a report about one of the agent’s classmates who had joined the CIA, Figliuzzi said.By early 2010, the FBI had penetrated the ring’s communication.

nvestigators were able to record the Russians sending secret messages, and posing as Russian handlers they used the spy ring’s own lingo to get members to incriminate themselves.In one videotape, Anna Chapman, the former New York real estate agent whose youth and good looks made her the face of the spy saga when it became public knowledge, is shown shopping in a New York department store. She was also transmitting coded messages though a laptop to her Russian handler, Figliuzzi said.

Other agents sent information to their handlers by leaving it at a prearranged location (known as a dead drop) or by handing it off quickly while walking by a person (a brush pass).Chapman, who has since become an international celebrity, was not as well-trained as most of the others, Figliuzzi said. She was sent to the U.S. after the Sept. 11, 2001, terrorist attacks because she could operate in an era of greater scrutiny using her real name, he said.Months later, in a Manhattan coffee shop, an undercover FBI agent got Chapman to acknowledge her affiliation with Moscow.

The U.S. government reportedly learned about the spy ring from Col. Alexander Poteyev, an American mole in Russian foreign intelligence who fled Moscow days before the FBI arrested the Russians. A Russian military court convicted him in absentia for high treason and desertion.The U.S. ultimately arrested the 10 Russians and swapped them for four Russians who were serving time after being convicted of spying for the West.

Russian President Dmitry Medvedev awarded the 10 freed spies Russia’s highest honors at a Kremlin ceremony. Chapman, a diplomat’s daughter, has kept a high profile in Russia, working as a model and doing paid celebrity endorsements.An 11th suspect, Christopher Metsos, who delivered money and equipment to the sleeper agents, absconded after a court in Cyprus freed him on bail. The FBI released surveillance photos of Metsos, who reportedly claimed to be Canadian, on Monday. – Latimes