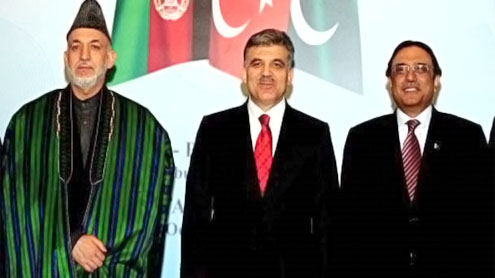 ISTANBUL: Trilateral summit between Pakistan, Afghanistan and Turkey hosted by Turkish President ended with show of solidarity when the presidents of three participating countries jointly shook hands at the end of the joint press conference.

The interior ministers of three countries started this solidarity when they shook hands after signing the agreement. Pakistan’s Interior Minister Rehman  Malik took the  initiative to hold the hands of his counterparts from Afghanistan and Turkey and expressed the solidarity by raising the hands of the three ministers together.This gesture was followed by the three presidents when they shook hands together after completing their press conference. – APP