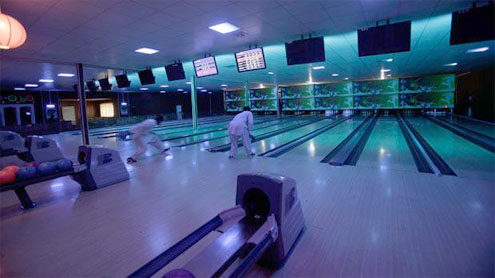 KABUL: In an Afghan capital scarred by years of war, a young Afghan woman has bet $1 million that her countrymen could use a little fun.

Located just down the street from Kabul’s glitziest mall is The Strikers, the country’s first bowling alley and owner Meena Rahmani’s gamble on the capital’s newest entertainment venue. But more than a place for family fun in a city largely devoid of options, the 12-lane center stands as a reflection of both the country’s hope for the future and the challenge of securing one even as NATO’s fight against the Taleban enters its 11th year.

“We can never compare a bowling center … in Afghanistan and one … in the West,” said Rahmani. “Afghanistan needed a place like this.”Aside from the cultural significance of such a center in a country largely lacking entertainment choices, building the bowling alley was a massive undertaking. All the equipment is imported, the engineers came from China and the alley is powered by several industrial-sized generators. The entrance to the alley sits behind blast-resistant steel doors guarded by burly men toting AK-47 assault rifles.“This was a huge project,” said Rahmani, but “we were committed to it.”

Rahmani has gambled $1 million of her own money that the center will not only help bored Afghans kill a few hours, but also a place where men, women and families can gather and relax, not burdened by the social, religious and cultural restrictions that govern daily life in the impoverished country.Inside, several dozen Afghans, most of whom learned to bowl abroad, seem to agree.

In the month since it opened, The Strikers has become a hit.“Here, on our days off, we walk aimlessly in the streets,” said Navid Sediqi, a 29-year-old businessman. He said he used to begin his weekend by logging onto Facebook and chatting with his friends online. After Friday prayers, they would go to picnic areas or parks, and sit and chat.

“This is so much better. Finally, a bit of excitement on our days off,” he said, dressed in a pressed, white traditional shalwar kameez.For most people in this city of about 5 million, there were, for years, few options to while away the hours.There are kite fights, picnics or paddle-boat rides on a lake on Kabul’s outskirts, as well as football games on dirt pitches that ring Darulaman Palace, the bombed-out seat of former Afghan kings.

Some rusty amusement rides have been set up for children, including in a graveyard.Snooker clubs also have sprouted up around Kabul, but they are largely seen as attracting unsavory characters — people who Sediqi described as “not the kind of open-minded people” one would find at the bowling alley.

Like most everything else in Afghanistan, the alley is a study in contrasts and challenges, not the least of which is that it’s a business started by a young woman in a country where women have traditionally been pushed firmly to the sidelines.Rahmani, who left Afghanistan in 1992 and spent 15 years in India with her parents before moving to Canada for graduate studies, said the idea came to her when she visited her home country several years ago and found there was nothing for Afghans to do beyond occasionally going out to eat, going for walks or visiting family.The alley seemed like a good antidote to the boredom.

But the daily reality of life in the troubled nation is clearly reflected outside the alley’s main door.In a country where restaurants frequented by wealthier Afghans and Westerners require patrons to check their guns at the door, bowlers get frisked by security before entering the building. It’s not without reason — a nearby shopping mall was hit twice by insurgent attacks since it opened in 2005. Above the second steel door sits a sign all too common in Afghanistan: “No weapons.”The Strikers is divided into two parts, a restaurant and 12 fully-automated bowling lanes with computer scoring.

The alley, which opened about a month ago, was built from the ground up. The equipment was imported from the United States and the engineers who set it up and trained the local staff came from China.“Since there had never been bowling in Afghanistan, no one here knew how to set it up,” said Rahmani, while a group of young Afghans sipped energy drinks and watched their friend toss a neon bowling ball straight into the gutter.

While men so far make up the bulk of the bowlers, Rahmani said women are increasingly making an appearance, coming with their husbands and families. She sees their presence in the alley as an encouraging sign of changes in the country. If it catches on, she said, she sees expanding to other provinces and starting bowling leagues in the country.

“This place is made for our own nation,” she said, stressing that politics has no role in the push for fun. “It’s just a sports place.”Kabul’s unreliable electricity network meant she had to install industrial-size generators to ensure a steady stream of power. The operating expenses for the first month alone came to $30,000, most of it for utilities.Those expenses mean that it’s a pastime for a select few in the capital.

An hour of bowling costs $35, which can be divided between as many as six players to a lane. A cup of coffee costs $5, more than the average local daily wage.She concedes it’s unaffordable for most in the country, but says that when expenses and startup costs are so high, she had little choice but to charge such rates. If it catches on, prices could quickly drop. – Arab