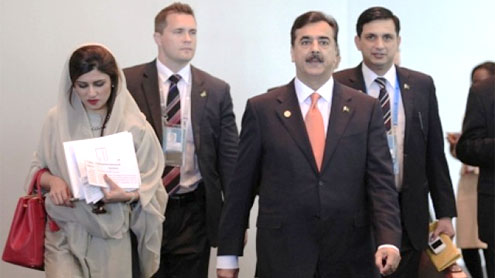 PERTH, Australia: Prime Minister Syed Yusuf Raza Gilani Friday said Pakistan was a courageous nation with unmatched resolve and urged the Commonwealth countries to be more relevant to the needs of its member by being more resilient.

Gilani was speaking at the second Executive Session of the Commonwealth Heads of Government Meeting (CHOGM) that was officially opened by Queen Elizabeth II earlier this day here, at the impressive Perth Exhibition and Convention Centre. “Building a resilient Commonwealth is necessary if we are to get to grips with numerous challenges we are facing as individual states, as well collectively on the global plane,” Gilani told the gathering while speaking on the theme – Building national resilience, building global resilience. Foreign Minister Hina Rabbani Khar was also present.

The Prime Minister mentioned the series of natural calamities the countries faced in the recent past and said challenges had become local and global at the same time.“It is therefore essential to evolve and put in place appropriate well-integrated mechanisms at local, national and international levels. Without this, our efforts may not yield much,” he added.The Prime Minister recalled the horrific earthquake of Oct 2005 that killed over 80,000 people, the devastating floods of last summers and this year, that displaced over 20 million and rendered huge losses accumulating to over US 12 billion dollars.

Taking advantage of his international audience, Gilani informed them about the country’s unprecedented loss of over 35,000 precious lives, and economic losses running close to US 70 billion dollars due to the ongoing war against extremism and terrorism.“Despite all these enormous challenges, our courageous nation stands united and steadfast, demonstrating unparallel attributes of national resilience and resolve,” Gilani said.“Against all odds Pakistan continues to progress steadily under the democratic leadership,” Gilani told the gathering of the Commonwealth members that restored Pakistan’s membership in 2008, soon after his government came into power.
“Pakistani nation can, therefore, rightly take pride in its resilience with which it has sustained through the crises,” he said.

However he pointed that resilience enervates and drains, if put under frequent strains, and with no hope for normality in sight.“Whether it is climate change or terrorism, it is disease or food security, we need each other not only for addressing our present challenges, but also to ensure a better future for posterity,” Gilani said.He assured the 54-member body that the government and people of Pakistan fully support the building of a resilient Commonwealth.He said over the span of next two days, the leaders need to take up this challenge how to achieve this shared objective through formal and informal interaction. – APP