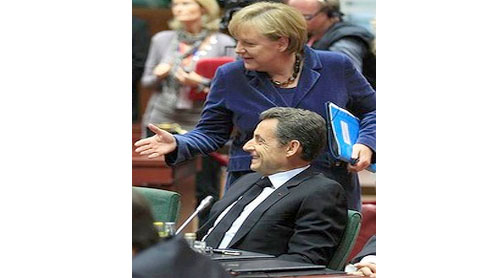 World financial markets soared Thursday after the European Union approved a plan to cut Greece’s debt in half and significantly increase a bailout fund designed to contain the eurozone debt crisis.

The Paris stock exchange jumped more than six percent, with the Frankfurt market advancing more than five percent. The London exchange closed up nearly three percent, and U.S. indexes were all ahead by more than two percent in midday trading.European leaders said the debt-relief agreement could help resolve the continent’s two-year-long crisis and give Greece a chance to regain its economic footing. German Chancellor Angela Merkel said “we have done what needed doing.”

French President Nicolas Sarkozy said it was a “credible and ambitious” plan, while Greek Prime Minister George Papandreou said the result would be “a new era, a new chapter” for his country.U.S. President Barack Obama welcomed the deal as a “critical foundation” to help solve the eurozone crisis and said the United States will support its European allies to address global economic problems.

Following 10 hours of tense negotiations in Brussels, EU leaders said they had convinced banks and investors to accept a 50 percent loss on Greek government bonds, effectively reducing Greek debt by $140 billion. At the same time, the banks are required to raise an additional $148 billion by June.

The 17-nation bloc that uses the euro currency is increasing the firepower of its bailout fund to $1.4 trillion to cover future assistance for debt-ridden nations.The deal still leaves Greece with a significant debt burden – estimated at 120 percent of its economic output in 2020, down from 160 percent now. But Greek Finance Minister Evangelos Venizelos said that debt level “becomes viable” for the country.

French Finance Minister Francois Baroin said the deal has effectively saved the European single currency, telling French radio that it will “stabilize the eurozone and global growth.”  World Bank chief Robert Zoellick welcomed the deal, as did officials in China and Japan.Financial analysts and world leaders outside Europe have said in the past that the continent’s leaders were too timid in dealing with the crisis. International creditors have approved single bailouts for Ireland and Portugal and two for Greece.

Those bailouts failed to calm the fears of financial markets that Greece would evenutally default on its obligations, and that the debt contagion would spread to bigger European economies in Italy and Spain.Analysts said Thursday the Brussels agreement could give the continent’s weaker economies more time to grow and adapt to the austerity measures their governments have imposed. – Voanews